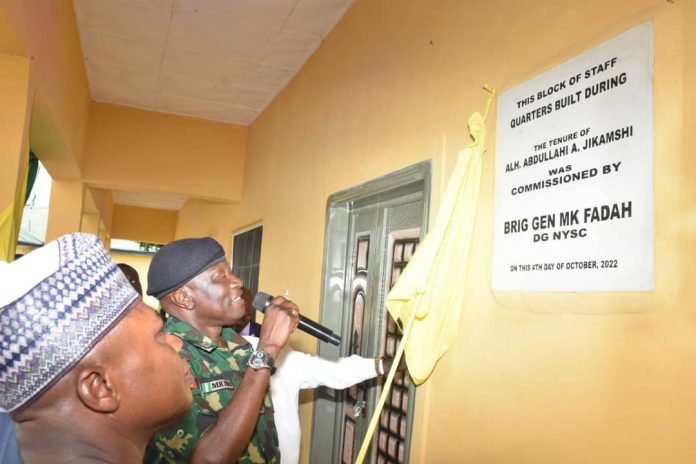 This was contained in a statement issued by Caroline Embu for the Director, Press and Public Relations of NYSC on Tuesday, October 4, 2022.

According to the statement, the NYSC Helmsman commissioned a three room block of staff hostel at the NYSC Nasarawa State Orientation Camp in Keffi as part of activities to mark his One Hundred days in office.

Speaking during the commissioning, General Fadah reiterated his determination to give more priority to the security and welfare of staff and Corps Members nationwide.

He poured encomiums on NYSC Top Management for their unalloyed support since he assumed duty as the nineteenth Chief Executive of the NYSC.

“Without mincing words, I commend the top management of the Scheme for being steadfast and supportive while l also need more support”, he said.

He stated that the NYSC Scheme as the foremost youth agency in Nigeria had contributed immensely to national integration, national development and human empowerment.

Fadah also said the deployment of Corps Members across the country had added more value to the Scheme in the areas of agriculture, education, rural infrastructure, health, economic growth, among others.

“Under my leadership, management will continue to provide platforms that will aid national development and integration”, he said.

General Fadah commended NYSC Nasarawa State Secretariat for the initiative, adding that more was expected from them to achieve greater feats.

The Director General however called on other State Secretariats to emulate the initiative.

In his goodwill message, the Chairman, NYSC Nasarawa State Governing Board, Barrister Abimiku Hanatu Bala, who was represented by the Permanent Secretary, Ministry of Legal Matters, Youth and Special Needs, Mr Alphonsus Mai-Keffe promised the continued support of the State Government for the Scheme in Nasarawa State.

In his welcome address, the NYSC Nasarawa State Coordinator, Alhaji Abdullahi Jikamshi said Corps Members came up with the design for the project.

He added that in the course of inspecting camp facilities, he showed the DG efforts made so far on the project which was at the roofing level, and this made the Director General to render assistance for its completion.

Jikamshi added that the commissioning was a foretaste that General Fadah’s administration would record great accomplishments for the NYSC.

He commended Nasarawa State Government for supporting the Scheme but added that there is the need to provide “a 3,000 capacity multi-purpose hall to accommodate Corps Members during critical camp activities”.