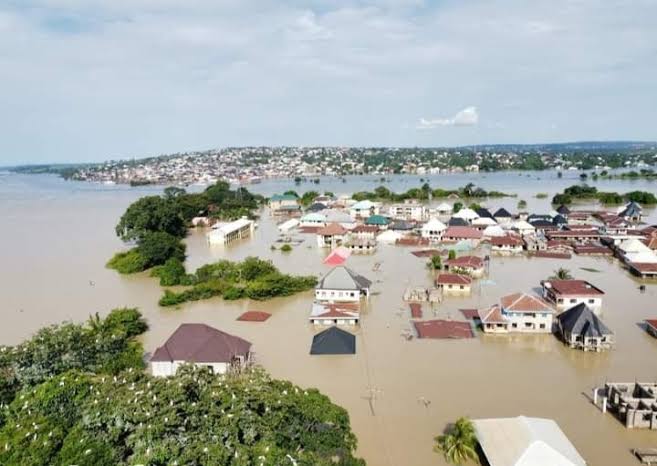 As Nigerians count the costs of the rampaging floods in parts of the country, managing it has been largely left to the victims devices.

Whole towns and communities have been cut off completely,and farm lands and products in several states including, Nassarawa, Bayelsa, Delta, Rivers, Anambra, Kogi, Adamawa, Edo, Akwa Ibom, Cross Rivers among others have been lost to the floods. The East/West Road linking Delta,Bayelsa,Rivers,Akwa Ibom,Cross River has been cut off from the Ughelli end.

The Delta State University of Science and Technology at Ozoro hurriedly sent staff and students home as a result of the rampaging floods that over ran the two campuses in Ozoro.

The Ughelli/Asaba Expressway has been cut off at Emevor, Ozoro, Ellu, Aradhe, Isiagu, and Ogwashi Uku axis thus making it almost impossible for commuters to ply that route. Whole communities in Ughelli North and South, Burutu, Patani, Bomadi, Sagbama and Otuoke are begging for attention as a result of the deadly floods.

Secretary-General Antonio Guterres announced earlier this year that the United Nations would “spearhead new action to ensure every person on Earth is protected by early warning systems within five years. ITU is supporting this initiative, which is led by the World Meteorological Organization (WMO).
But governments in Nigeria have been slow in committing resources to address the plight of people in the Internally Displaced Persons (IDP) camps some of which are created by public spirited people in various communities.

Several trucks laden with premium petrol products were trapped on the Lokoja/Abuja expressway as a result of the floods which over ran the Lokoja axis thus creating grim scarcity for petroleum products in the Federal Capital Territory and environs.Long queues have since taken over as vehicle owners have found it increasingly difficult to source the products.

Several foodstuffs trucks from the Northern region also got trapped in the floods on the Lokoja axis thus creating scarcity for such foods like tomatoes,pepper,onions and livestock.

Only recently, the USA Ambassador to Nigeria Mary Beth Leonard announced a $1million donation to the Federal Government of Nigeria.
The fund, to be administered by the United State Agency for International Developments (USAID), is expected to provide multipurpose cash assistance for people impacted by the devastating floods.

The US Mission said the floods have exacerbated an already critical humanitarian situation in Nigeria, “where ongoing conflict, especially in the northern region, has driven millions of people from their homes.”

“In the same region, more than 4 million people are projected to continue experiencing acute food insecurity amid the worsening global food crisis,” according to a statement from the embassy.

“We are filled with grief for the flood victims who have lost so much – livelihoods, homes, and even loved ones,” the US Ambassador said.

In what looked like the first response to the floods,Humanitarian Affairs, Disaster Management and Social Development Minister, Hajiya Sadiya Farouq, said Bayelsa State, which is reeling under floods, was not among the 10 most hit states.

She said Jigawa State, which recorded the highest number of deaths is the number one of the states most affected by the disaster. But Bayelsa State government, countered the Minister and accused the Federal Government of failing the state in response to the flood that devastated it.

Strangely too the minister also said that her ministry was not aware of any $1 million donation or pledge by the United States as humanitarian aid for flood victims in Nigeria.

But while rescuing the flood prone states and victims remains a paper work laced with controversies,the International Telecommunications Union (ITU) carried out a rescue exercise in Nicaragua when the country encountered a hurricane through deployment of emergency telecommunications technology.

“The river rose one metre in ten minutes,” according to eyewitness accounts.

Critical electricity and telecommunications services were cut shortly after the storm made landfall, leaving a million people in the dark and worried about their loved ones’ safety.

But connectivity gaps were quickly closed through the emergency telecommunications by deploying 10 Iridium satellite phones and 10 Inmarsat Broadband Global Area Network (BGAN) terminals to help restore connectivity as soon as possible, and to provide training for local teams to use the equipment.

The UN agency for information and communication technologies (ICTs) also supports the development and implementation of National Emergency Telecommunication Plans (NETP) among other regulatory and legal disaster preparedness frameworks.

The ability of cell broadcast technology to push messages without being affected by traffic load makes it useful during emergencies when data traffic spikes, and regular SMS and voice calls tend to congest mobile networks.

All of these are made possible via broadband.The ITU report says
“about 95 per cent of the global population is covered by a broadband network, with 5.7 billion mobile subscriptions, meaning at least 70 per cent of the world is connected,” adding that “Cell broadcasting technology should be used to its fullest potential to warn people ahead of disaster.”