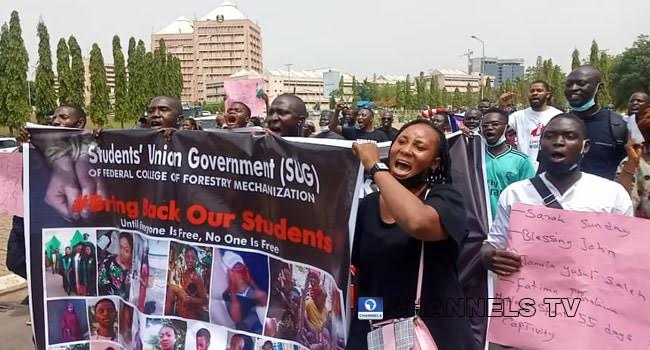 Parents of the abducted students of the College of Forestry Mechanization Afaka in Kaduna State today stormed the National Assembly complex, Abuja, in protest.

The protesters include colleagues of the victims and members of the Students Union Government (SUG) of the school, decrying what they describe as  negligence of the state and Federal Government in securing the release of the children.

TheFact Nigeria reported that there had been similar protest by the parents in Kaduna last month with the promise to take it to NASS should their demands not be met.

“Education is our right! Safety is our right! Freedom is our right!, Free Afaka 29! ” the parents and students chanted as they marched to the National Assembly, carrying placards with the names and pictures of the abducted students.

The protesters earlier gathered at the Unity Fountain and proceeded to the National Assembly complex where security agents prevent manned the main entrance.

On 11th March 2021, 39 students were abducted by bandits from their hostels in the college.

Ten students have so far been released in two batches of five each.