No fewer than 50 suspects alleged to be members of various notorious criminal gangs and networks across the country, have been arrested by operatives of the Nigeria Police Force.

TheFact Nigeria notes Mba’s disclosure that the arrests, which were carried out by operatives of the Intelligence Response Team and the Special Tactical Squad of the Force attached to the Operation Puff Adder II, are outcomes of successful follow-up on cases bordering on kidnapping, armed robbery, banditry and unlawful possession of firearms, amongst others.

According to Mba, “A total of 10 sophisticated prohibited firearms, 2,496 AK47 live ammunition, 10 live cartridges, cartons of tramadol drugs worth over N3 million, bags of weed suspected to be Indian hemp, two laptop computers and eight mobile phones, were recovered from the suspects in the operations”.

Speaking on some of the notable arrests, the PPRO said operatives had, during a confidence building patrol along Kachia – Kaduna Highway, intercepted one Danjuma Dachung, 30, native of Ryom, Plateau State and Markus Danladi, in Kachia, Kaduna State, conveying 1,565 AK47 ammunition in a Volkswagen, Golf 3 car.

“Investigations by the Police team revealed that the suspects are members of a major ammunition supply syndicate that supplies ammunition from Jos to bandits in their various camps and hideouts in forests in Kaduna State.

“Further investigations led to the arrest of one Suleiman Tukur, and his son, Shuaibu Suleiman, 18, who are relatives of a notorious gang leader, who was to receive the ammunition conveyed by Dachung and Danladi.

“Two Hundred and Thirty-One AK47 live ammunition were recovered by the Police team at their residence in Karabi, Kaduna State. 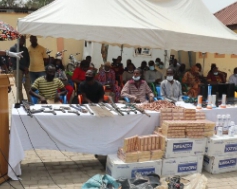 Mba further disclosed that the Police team also arrested two suspects, Daniel Baba, 28, and Andrew Gbagi, 30, both from Kwali Area Council of the Federal Capital Territory FCT. The suspects were arrested at the point of brokering a gun sales deal in the Kwali area of the FCT.

Investigations revealed that the suspects specialize in selling all calibre of firearms to armed robbers and kidnappers in the FCT and its environs.

“They also carryout armed robbery operations in Paiko, Dobbi, Kwali, Gwagwalada and Abaji communities in the FCT. Investigation is being intensified to locate their armoury, sponsors and other members of the gang now at large”, he said.

The PPRO further conveyed sentiments of appreciation on behalf ofthe Inspector-General of Police IGP, Mohammed Adamu to the members of the public for the continuous support to the Police and the security community in ensuring safety and security in various communities.

Mba also conveyed the IGP’s assurances that the Force would be relentless in taking the battle to the doorstep of criminal elements hell bent on threatening the internal security order of the country and bringing such suspects to justice. 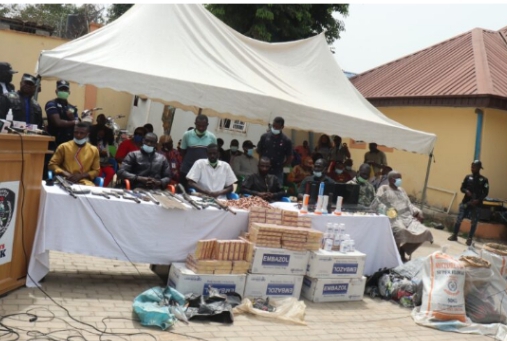 Synergize With UN, Others To Boost Fintech, Inuwa Begs FG