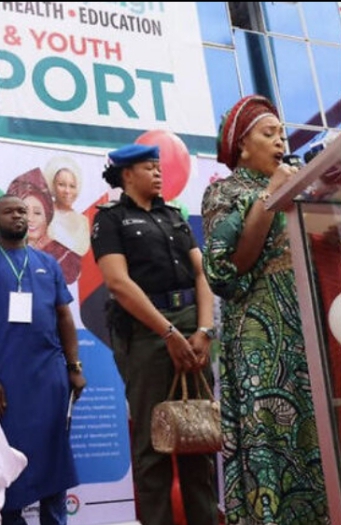 The Police Force has said it would identify and sanction an orderly for carrying the handbag of Hajia Titi Abubakar, wife of the Peoples Democratic Party (PDP) presidential hopeful, Alhaji Atiku Abubakar, at an event.

Force Public Relations Officer, CSP Olumuyiwa Adejobi, made this known Thursday, via his Twitter handle, @Princemoye, in response to a now trending picture on social media.

TheFact Daily reports that in the picture, the yet-to-be-identified police officer can be seen carrying the bag of the presidential hopeful’s wife, while she delivered a speech at the unveiling of the PDP women-focused initiative, tagged “SHE” initiative on Wednesday.

A Twitter user, @ Fify_ify, lamenting the picture, called out the Lagos State Police Public Relations Officer, Ben Hundeyin, saying it is ethically wrong for a police officer in uniform to engage in such activities as it may affect the execution of their primary duty.

“When a private citizen can turn our uniform force member into her maid, why won’t the police forget their primary duty and only dance to the tune of the elites? @BenHundeyin is this how it’s supposed to be?”, she tweeted.

According to him, the act is not only condemnable but also absurd as it goes against the ethics of the police profession. He added that necessary action to fish out the police orderly has commenced and she will be brought to book in no distant time.

“This is not acceptable. We have commenced necessary action on this. We will fish her out and get across to the principal. The AIG Special Protection Unit has been contacted to assist us get the woman police. Gradually, we will sanitise the system.

“How can an orderly be carrying a bag for her madam? I am sure the madam will have a PA, and that is the PA’s job. It’s an absurdity and this is condemned in its totality.”

In response to another Twitter user who pleaded with the police not to take the matter as something so serious, the FPPRO replied that, although it may mean nothing to the people outside the police force, it is a serious issue to the police and necessary action must be taken to put an end to it.

He added that sentiment will not be used while addressing the issue, saying the current administration of police is serious about the reformation of the system.

“To us in the police, it’s an absurdity and should not be allowed to continue. To you, it might not be serious but to us, it is serious for many reasons, some of which are known to you as well. We don’t need any sentiment if at all we are serious about reform”, he said.