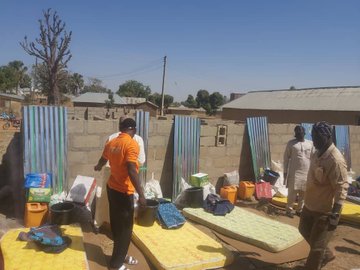 According to a Predidential directive, the National Emergency Management Agency, (NEMA), has distributed relief items to 810 households affected by the 2020 floods in Bauchi State.

Information obtained from the official Twitter handle of @nemanigeria, the Agency said that its Director General, AVM Muhammad (rtd) was represented by the Head of Gombe Operation Office, Mr. Simon Katu in the distribution which was carried out in collaboration with officials of Bauchi SEMA and security agencies

@nemanigeria [email protected]: “@nemanigeria has distributed relief items approved by the President, HE @MBuhari for 810 households affected by the 2020 flood in Bauchi State.

“@officialdgnema AVM MA Muhammed (rtd) was represented by Head of Gombe Operation Office Simon Katu in flagging off direct distribution of the relief items. The distribution was carried out in collaboration with officials of Bauchi SEMA and security agencies

“Present were representative of Bauchi State Government, a member of National Assembly from the State Yakubu Shehu, religious leaders and heads of the affected communities. Items distributed were food and non-food materials”..

On the other hand, NEMA has said that it has concluded the February distribution for internally displaced persons in camps which began on the 25th.

Again, @nemanigeria wrote: “@nemanigeria has concluded the February food distribution which began on 25/02/2021 for the Internally Displaced Persons in camps, host communities and liberated communities in Borno state under the Federal Government Emergency Food Intervention In the North East.

“The President, HE @MBuhari approved the food items.

@officialdgnema AVM MA Muhammed (rtd) was represented by the team leader, Navy Captain Mustapha Abdullahi in coordinating the distribution to about 38,000 households at the 20 camps, host and liberated communities.