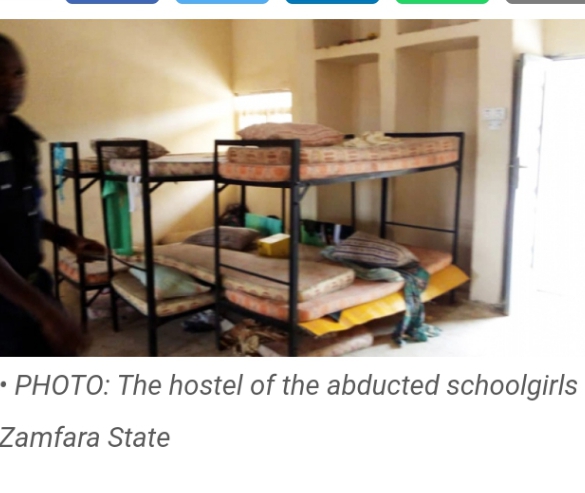 Seven out of the 317 schoolgirls abducted from the Government Girls Secondary School, Jangebe in Talata Mafara local Government Area of Zamfara State in the early hours of Friday, 26 February, have escaped from their kidnappers den.

A source revealed that the girls returned home on their own, claiming they manoeuvred their way back from the bandits while trekking along the forest. The girls also said that more had also escaped and are expected back soon.

TheFact Nigeria learns from a resident in Kawaye village, who identified himself as Sadi Kawaye, said his daughters, Mansura and Sakina were among those abducted from the Government Girls Secondary School, Jangebe.

Reacting to the development, the Zamfara Police Commissioner, CP Abutu Yaro, had earlier said a joint search and rescue operation was already underway with a view to rescuing all 317 students.

CP Yaro said the Force Commander Operations Hadarin Daji, Major General Aminu Bande, Brigade Commander 1 Brigade, Nigeria Army Gusau, and other state government officials led a heavily armed re-enforcement team to Jangebe to complement the ongoing rescue operation in the locations where the students were believed to have been whisked to.

The Commissioner, while interfacing with the principal of the school and the parents, appealed to everyone to remain calm assuring them that the joint efforts of the police and other security agencies will surely lead to a successful rescue of the students.

Meanwhile, President Muhammadu Buhari has described the abduction of the Government Girls Secondary School girls from Jangebe in Zamfara State as inhumane and totally unacceptable, and has sent out a strong warning to bandits and their sponsors.

Reacting to the incident on Friday, President Buhari said that “this administration will not succumb to blackmail by bandits who target innocent school students in the expectations of huge ransom payments.”

According to the President, “no criminal group can be too strong to be defeated by the government,” adding that, “the only thing standing between our security forces and the bandits are the rules of engagement.”

“We have the capacity to deploy massive force against the bandits in the villages where they operate, but our limitation is the fear of heavy casualties of innocent villagers and hostages who might be used as human shields by the bandits,” he said, stressing that “our primary objective is to get the hostages safe, alive and unharmed.”

President Buhari noted that “a hostage crisis is a complex situation that requires maximum patience in order to protect the victims from physical harm or even brutal death at the hands of their captors.”

Warning the bandits, President Buhari said, “Let them not entertain any illusions that they are more powerful than the government. They shouldn’t mistake our restraint for the humanitarian goals of protecting innocent lives as a weakness or a sign of fear or irresolution.”

He also advised states and local governments to be more proactive by improving security around schools and their surroundings.

Last Saturday, on a Channels Television program, the Minister of Information, Mr Lai Mohammed, while explaining some of the strategies to curb the spate of abductions in the country, with regards to the students of Government Science Secondary School, Kagara, Niger State, had said that no ransom will be paid for the release of the abducted students.

While he ruled out the option of paying ransoms, the minister assured Nigerians that the “government has put in place various strategies to contain banditry, insurgency and kidnapping.”

“Some of these measures are kinetic, some are non-kinetic,” Mr Lai Mohammed said, without disclosing any specific actions.

According to him, the same was the case for the abducted Kankara schoolboys in Katsina State and the Dapchi schoolgirls in Yobe State, where contrary to reports, he claimed that no ransom was paid to secure their release.

He described the stories about ransome payments made by government for the release of the students as mere conspiracy theories.

He continued by saying: “I can assure you that the government is on top of the matter – but it is not a subject matter for television discussion.

“We didn’t get there overnight, that is why we can’t get out in one day”, the minister said.