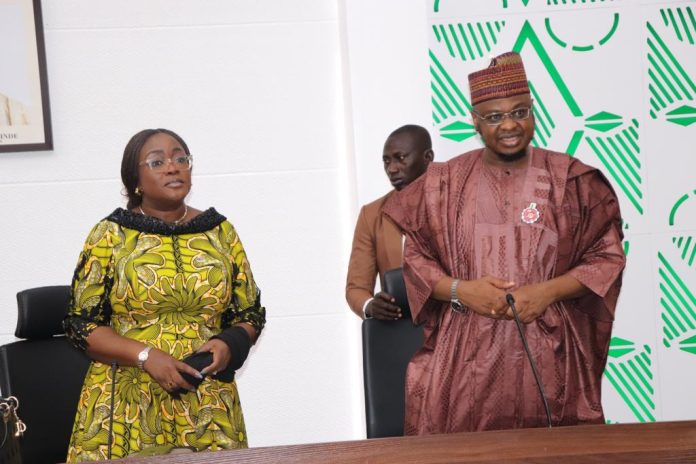 Stakeholders in the telecommunications industry have lauded the federal government for its commitment in providing leadership and guide for sector growth.

According to a statement by the Director Public Affairs for the Nigerian Communications Commission(NCC) Reuben Muoka on Thursday, the commendation came after the Minister of Communications and Digital Economy, Prof. Isa Pantami, listed about 20 policies.

The policies were aimed at promoting different areas of the digital economy, including the flagship National Digital Economy Policy and Strategy (NDEPS) 2020 – 2030, and the Nigerian National Broadband Plan (NNBP) 2020-2025.

Pantami who spoke to a cross section of participants at the ongoing 10th Edition of the National Council on Communications and Digital Economy, in Oyo state said, the recent assessments by the Foreign Development and Commonwealth Office (FDCO) and the KPMG Consulting, were based on eight key priority areas, one of which was in revenue generation, where the sector raised government revenue profile by 594 per cent.

Among those who applauded the Federal Government’s vision for the sector are the Secretary to Oyo State Government, Her Honour Olubamiwo Adeosun, who represented His Excellency Oluseyi Makinde, Governor of Oyo State; and the Executive Vice Chairman and Chief Executive Officer (EVC/NCC) of the Nigerian Communications Commission (NCC), Prof. Umar Danbatta.

Emphasising the centrality of digital innovation and digital entrepreneurship to a robust digital economy, the Minister commended the participants for the quality of evaluation, recommendations, and criticisms that attended the memoranda presented at the Council.

He urged the media to give the best coverage to the communique to be issued after the meeting and enjoined professionals in the media systems of communication to note specific recommendations and the corresponding role of each stakeholder in the implementation of each item in the communique.

The Minister announced that 110 memoranda and recommendations were presented to the Council, out of which 67 were approved for Council implementation. The remaining 43 recommendations are to be reconsidered in the next meeting of the Council.

Pantami thanked the Government of Oyo State and the Olubadan of Ibadan, His Imperial Majesty, Dr. Lekan Ishola Balogun, Alliwo Okumade II, for receiving him and his team on courtesy visit he paid earlier to the Palace, and to the Governor’s Office where Adeosun had earlier received the Minister on behalf of the Governor.

In his goodwill message, the EVC of NCC, Danbatta praised the Minister for his impeccable supervisory role as the leader of the sector.

Danbatta also praised the Federal Government for being the most revolutionary administration in terms of commitment to the utilisation of digital resources for the growth of individuals, businesses and the national economy through design of policies to achieve concrete, measurable and remarkable deployment of cutting-edge technological applications.

On behalf of the Board and Management of NCC, Danbatta thanked participants for their attendance and active participation, which, he said, attested to the importance they all attached to the promotion of digital economy and culture.

Amplifying the voice of the Minister, the EVC stated that the participants’ commitment to the government’s digital economy agenda has been well demonstrated in the methodical review of the recommendations of the 9th Council meeting, objective identification of achievements, and the frank approach taken to chart the path towards future goals and expectations.

The EVC promised that the “NCC remains committed to supporting all policies, strategies, plans and initiatives that promote the provision of modern, universal, efficient, reliable, affordable, and easily accessible communications services and give the widest range throughout Nigeria.”

He also emphasised that it is in demonstration of its commitment that the Commission undertook a timely release of spectrum in the 3.5GHz band for the deployment of 5G services to ensure that Nigerian citizens, businesses, public institutions and other stakeholders are enabled with requisite infrastructure to engage in the emergent digital economy and culture.