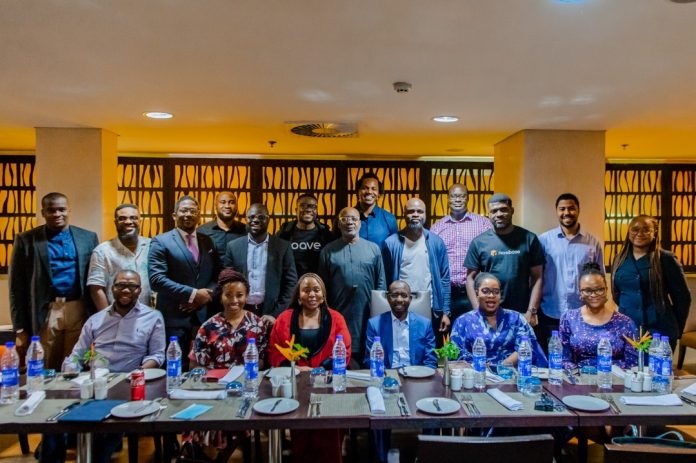 The Director-General, National Information Technology Development Agency (NITDA), Kashifu Inuwa has pledged that the Agency would give the Lagos ecosystem the needed support in order to boost the sector’s contribution to the economy and strengthen the value chain.

Inuwa’s who made the pledge during a dinner meeting with some key stakeholders of Lagos Ecosystem, including representatives from Microsoft, MasterCard, Norebase, and among others, said, the state has continued to maintain itself as a viable community with the strongest unicorn of innovation in the country.

The NITDA boss while suing for trust, and strengthening of the value chain deliberated on the best way to accelerate growth and support startups in the country, said, “there are lots of distrust within the government and the ecosystem, so much that the only way to engender trust between the two entities is to have this conversation”.

He assured the group of his unrelenting support to the ecosystem which he maintained would be his return base upon retirement from government service. He emphasised the need for collaborations across the board to achieve a faster and more sustainable digital economy.

“We cannot succeed in isolation; we need each other to succeed. Innovation is not distributed evenly across the world. Innovation and digital economy is about humans”.

“A company is as good as its next product and its products are as good as the person or people who make them. This underscores the relevance of talents. If you don’t have the requisite skills and talents, then it is no deal”, he added.

The DG seized the opportunity to share his thoughts on different issues bordering on investments, partnerships, commercialisation of innovations, enabling policies and acquisition of relevant skills as well as trainings.

“At NITDA, we are reenacting our act and laws to make it more robust so that we protect the ecosystem”, Inuwa stated.

“The sector we are in is dynamic and we must move with its pace, so we don’t play catch ups or get left far behind. We must disrupt the way we do things and bring to bear professionalism, innovations that will solve indigenous problems but have global impact”, the DG urged.

While taking turns to share their ideas and challenges, some of the representatives touched on diverse areas of concern and specialisations, including soliciting for government support in the development of hardware space, funding, talents, procurements, local content enforcement, mitigating gateways, policy timings and changes, data protection and management, digital skills framework, standardisation and others.

Reacting to their comments and questions, the Director-General extensively explained the efforts of NITDA under the supervision of the Federal Ministry of Communications and Digital Economy and by extension, the Federal Government in addressing most of the issues deliberated.

The Start-up Bill was also on the front burner of his response as the DG quickly reminded them that most of the concerns raised would soon be rested, given the recent passage of the Bill into law by the National Assembly.

He assured the startups of a speedy and effective implementation of the bill to deal with the bottlenecks experienced and in the process, fast track the anticipated growth of the ecosystem.

Moreso, Inuwa highlighted the Code of Practice for Interactive Platforms as another document that is expected to engender appropriate monitoring to enforce compliance to established regulations guiding the sector, while seeking for their contribution to the document.

“We need to decide what and what are the right regulations so that every startup and industry player would have a Code of Practice that works for everyone and is adhered to the latter. Also, I think we need to form a union for Startup Ecosystem”, Inuwa added.

The engagement with Lagos ecosystem ended with a resolve by all parties to forge ahead against all odds but not just as an ecosystem but a more united and prepared for the future tasks.

The meeting was part of NITDA’s stride towards making Nigeria a talent hub for Africa and possibly the digital world, especially as there are several reports indicating a global talent shortage.

EndSARS: We Did Not Order Shutting Down Of Fuel Stations -NUPENG

People in Power Win Election by “Hook or Crook” Not Me ~ M. Buhari