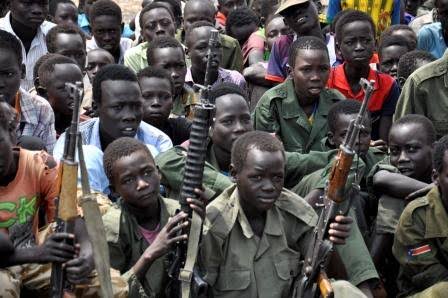 The United Nations Children’s Fund (UNICEF) has called for an end to the recruitment and use of children by armed groups in Nigeria, and the release of those in the custody of such groups.

UNICEF made the call on Monday, February 14, 2022 in commemoration of this year’s International Day Against the Use of Child Soldiers, also known as “Red Hand Day”.

TheFact Nigeria gathered that over 8,000 children have been recruited and used as child soldiers in different roles by armed groups in the 13 year period of insurgency faced by the country.

The call came on the International Day Against the Use of Child Soldiers, otherwise known as “Red Hand Day”.

According to UNICEF, the 13 years, armed conflict in north-east Nigeria has claimed thousands of lives and disrupted livelihoods and access to essential services for children and their families.

It noted that nearly one million homes and 5,000 classrooms had been razed in the protracted armed conflict and also, more than 8,000 girls and boys had been recruited and used as child soldiers in different roles by armed groups since 2009.

“We call for an immediate end to the recruitment and use of innocent children as soldiers or for any other conflict-related role.

“It is unacceptable and unconscionable that girls and boys continue to serve on the frontlines of a conflict they did not start”, he stated.

UNICEF called on the Nigerian authorities to sign the Handover Protocol for children encountered in the course of armed conflict in Nigeria and the Lake Chad Basin Region, which would end the detention of children formerly associated with armed groups.

The Handover Protocol would ensure children encountered during military and security operations are transferred from military custody to civilian child protection actors to support their reintegration into society through the provision of family tracing and reunification services and medical, educational and psychosocial recovery services. Support would also life skills support, skills training and links to decent work.

Ratified by the Government of Nigeria in 2012, the Optional Protocol places obligations on non-state armed groups, not to, under any circumstances, recruit or use in hostilities persons under the age of eighteen.

“We must do more to ensure that Nigeria’s children do not suffer the worst impacts of conflict.

“We owe girls and boys a chance to leave the horrors of conflict behind. Every day of delay in the custody of armed groups is a tragedy with grave implications for the children, families, and Nigerian society as a whole”, Nguyen said.