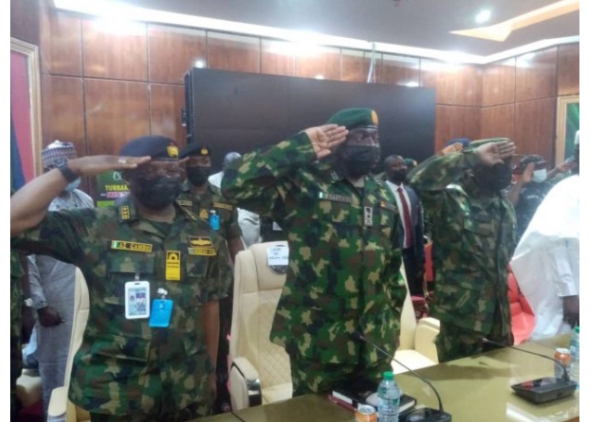 In furtherance to the implementation of the presidential order on terrorism and banditry in the country, the nation’s Service Chiefs have visited Zamfara State.

TheFact Nigeria reports that they were led by the Chief of Defence Staff, General Lucky Irabor in a security meeting with the state governor, Bello Matawalle.

The CDS, Irabor, who spoke on behalf of the delegation, said they were in Zamfara State to assess the security situation through their Field Commanders, reiterating the clear mandate given them by President Muhammadu Buhari to restore lasting peace in the country, particularly in Zamfara and the Northwest zone

Irabor expressed the determination of  the service chiefs to ensure the task was accomplished based on presidential directives to crush the bandits terrorizing the state while stating that the military was ever ready to carry out their assignment unhindered.

Receiving the military top bras, Governor Matawalle called on the Federal Government to provide modern warfare equipment to enable troops of the armed forces defeat the bandits who, he said, were spread in the forests of Zamfara and neighboring states, adding that a robust approach is needed to fight to end the activities of  bandits in the North West zone.

He further said that while the state government would continue with the dialogue with the criminal elements, it would also provide all necessary support and logistics to the military to succeed in their assignment.

Matawalle reiterated the need for the military to pursue the bandits right in the forest, rather than wait until they attack before they act.

In a statewide broadcast later, Governor Matawalle informed the people of the North West community that about six thousand troops were to be deployed to the state to combat the bandits, end their menace and bring lasting peace to the people.

To achieve this, the governor explained, all necessary arrangements had been concluded for the arrival of the troops.

He once again warned all bandits still in the act to, as a matter of obligation, surrender their weapons and repent within two months or face total elimination, even as he further said any bandit that refused to surrender would face the consequences of his action.

Governor Mutawalle further declared a ban on  all activities of vigilante groups in the state, warning that anyone who violates the directives would have his government to contend with.

He ordered security agencies to arrest any motorcycle rider found carrying more than one person, and warned sternly against the movement of motorcycles in groups.

Speaking further, he directed that all traditional rulers and local government caretaker chairmen should remain in their respective areas till further notice, while appealing to people of the state to give all the necessary support and cooperation to laid down rules and regulations.

“If You Rush Into Marriage, You’ll Rush Out” — Funke Akindele