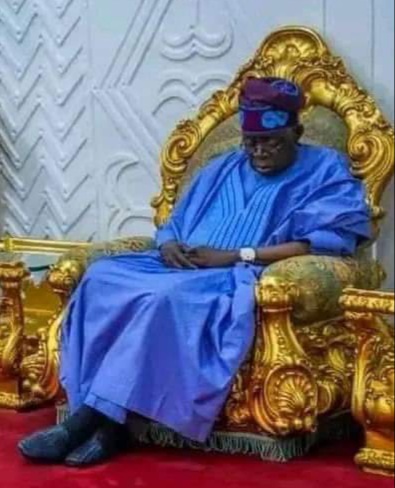 The Tinubu Network Organization (TNO) has described as sign of good health the recent deep sleep of the National Leader of the All Progressive Congress (APC) and the Presidential Candidate of the party, Asiwaju Bola Ahmed Tinubu.

Director-General, TNO Nigeria, Ganiyu Maroof stated this in a statement on Monday, September 19, 2022.

Tinubu was captured sleeping during his recent courtesy visit to the palace of Emir of Gombe state, consequently, has been trending on social media.

In reaction to this, TNO said, “sleeping or napping is an evidence of good living and this shows Tinubu is healthier than what many of the naysayers think of”.

It said, “Asiwaju Bola Ahmed Tinubu is a workaholic presidential candidate who doesn’t rely on any social media marketing or granting unnecessary interviews, but believes in physical consultations, which he had been doing even before he became the flag bearer of the party.

“The National Leader hardly sleeps due to his belief that a presidential project is not what anybody can toy with or rely on social media feedback. Rather, he believes in adequate and strategic planning with constant consultations, which he opines would definitely bring the targeted results”, it said.

It said, regardless of the noise the sleep has generated on the social media, Tinubu remains the aspirant to beat in the forthcoming February 2023 Presidential election.

It said, “TNO is of the opinion that only the lazy presidential candidates with unintelligent followers would use a mere event to continue making noise on social media while they watch their candidates allowing them to import various international disgrace under the pretence of granting one paid interview, and the other roaming about the country planning on how to hack the INEC server.

“TNO therefore, urges all the teaming supporters of our presidential candidate to be focused, dedicated, and have more confidence in the party and the candidate, as Tinubu remains the aspirant to beat in the forthcoming February 2023 Presidential election.

“To all the anti-Tinubu social media warriors and e-sponsored speculators, we would advise you to concentrate your efforts on how your candidates will win few wards in their various states, as creating unnecessary political scenes won’t help you sell your candidates or add a single vote to their scores, but rather show how unintelligent, myopic and unplanned supporters of a social media and less-structured Presidential candidates can be”, the organisation said.