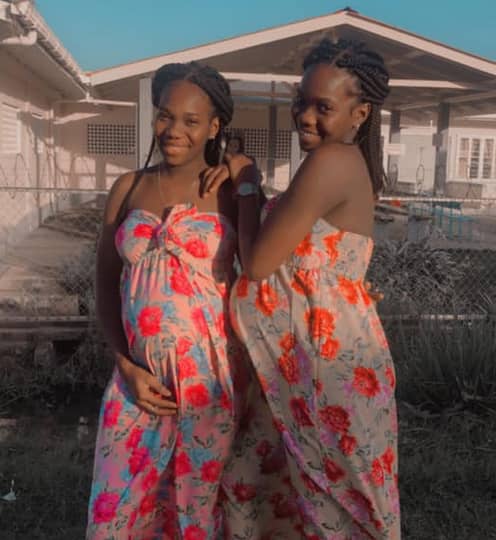 The new mothers, Amesha and Amela said they are thankful to God that they are able to share this experience with each other.

The story has been told of Amesha Thuesday Grant and Amela Latahsa Thuesday, the twin sisters who gave birth to babies on the same day.

The sisters on Wednesday, February 24, gave birth to their babies some 13 minutes apart at the New Amsterdam Regional Hospital in Guyana.

Both infants, a girl named Cassidy Miracle Grant and a boy named Myron Kingsley Rajgopaul arrived at 9:10hrs and 9:23hrs respectively. Both babies weighed some 3kg.

Amesha and Amela were both admitted to the hospital on February 23.

A statement posted by the Regional Democratic Council of Region Six (East Berbice-Corentyne), on Facebook said that the Regional Health Officer Dr Vishalya Sharma and Medical Superintendent Dr Vasana Henry were thrilled that the institution was chosen by the mothers to care and manage their deliveries.

The new mothers, Amesha and Amela said they are thankful to God that they are able to share this experience with each other.

“Father I wanna thank you for bringing me and my sister through safe with our delivery. Twins make twin cousins mins apart. They both would be celebrating their birthday together while me and my twin gone do the same” Amela wrote on Facebook.