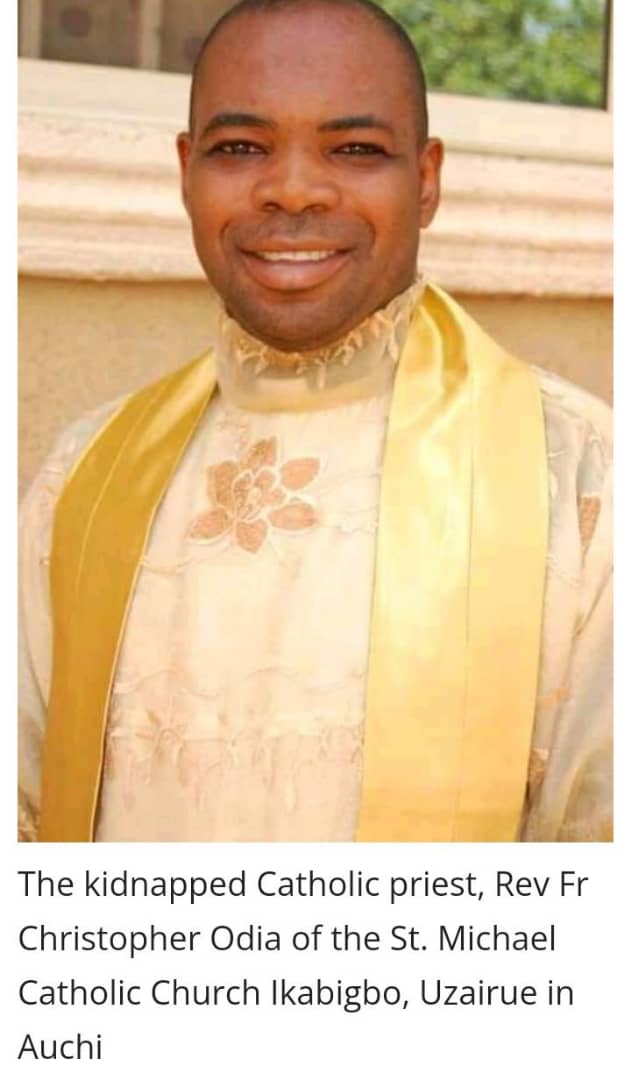 Two priests in the Roman Catholic Church were killed over the weekend in Nigeria, one in Edo state and the other in Kaduna state.

In Edo state, Revd. Fr. Christopher Odia was kidnapped from his rectory at St. Michael Catholic Church, Ikabigbo, Uzairue, at about 6:30 am June 26 and was killed by his abductors.

The unfortunate incident was confirmed on Sunday in the statement by the Director of Social Communications , Catholic Diocese of Auchi, Rev. Fr. Peter Egielewa.

According to Fr., Egielewa,”With heavy hearts but with totalg submission to the will of God, we announce the death of our priest Rev. Fr. Christopher Odia, who was killed by his abductors after being kidnapped this morning 26th June 2022 at about 6.30am in his rectory while coming out to go for Sunday Mass at St. Michael Catholic Church Ikabigbo, Uzairue, Edo State.

“Until his death, Fr Odia was the Administrator of St Michael Catholic Church, Ikabigbo and also the Principal of St. Philip Catholic Secondary School Jattu. He was aged 41. May his soul Rest In Peace. Burial arrangements will be announced by the Diocese later,” the statement said .

In Kaduna state, the Catholic chaplain at Kaduna State Polytechnic, Reverend Fr. Vitus Borogo, was killed June 25 at Prison Farm, Kujama, along Kaduna-Kachia Road, after a raid on the farm by Terrorists.

The chancellor of the Kaduna archdiocese, Revd. Fr, Christian Okewu Emmanuel in a statement on Saturday said ,“Until his death, Fr Vitus (aged 50) was the Chaplain of the Catholic Community of the Kaduna State Polytechnic, and the Chairman of the Nigerian Catholic Diocesan Priests Association (NCDPA), Kaduna Chapter,”.

Although, in Sokoto state , Fr Stephen Ojapa who was kidnapped alongside three others has regained his freedom.

The Director, Social Communications, Catholic Diocese of Sokoto, Fr Chris Omotosho who announced their release in a statement said,”With hearts full of joy, we announced that our brethren Fr. Stephen Ojapa, Fr. Oliver Okpara, Mr. Hassan Hassan & Ms. Ummie Hassan who were abducted by gun men at midnight of 25th May, 2022 in the rectory of St. Patrick’s Catholic Church, Gidan Maikambo, Kafur LGA of Katsina State, have all gained freedom. We thank you for your prayers, support, encouragement and show of love. May the name of the Lord be praised, now and forever. Amen! Thank you,” he said.