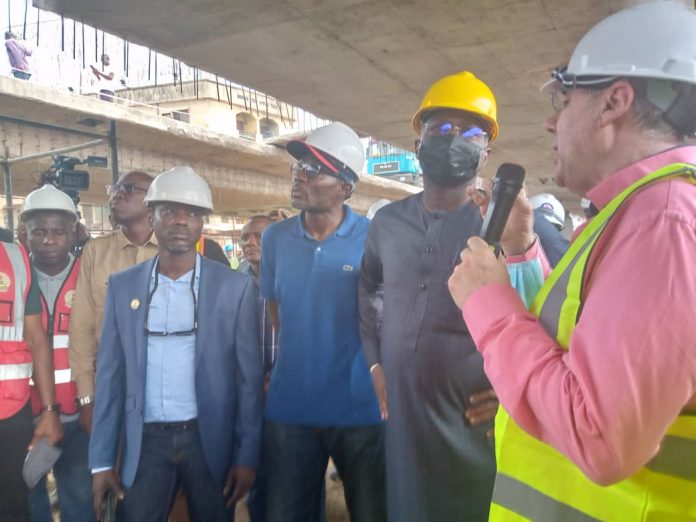 The Minister of Works and Housing, Mr. Babatunde Fashola has queried those living and selling under bridges in Lagos, saying that they were built for ease of vehicular movement, movement of goods and services and for the benefit of humanity.

This was contained in a statement issued by the Director, Press & Public Relations of the Ministry of Works and Housing, Ms Blessing Lere- Adams on Friday, November 11, 2022.

Ms. Adams said the Minister, while speaking during the inspection tour of the recently burnt Eko bridge, noted that tough laws were needed as regards the protection of bridges and that such laws must have Federal Government backing and support.

“If you don’t give tough laws, things will not be done. You have our support, under bridges are not places of cooking or a residing place and it’s not only endangering their lives but also the lives of other people. Illegal way of living must be put to an end.

“We are appealing to the Lagos State government to ensure that all trading activities under the bridges in the state must as a matter of urgency be brought to a stop. We seek the cooperation of the Ministry of Transportation, Environment, Local Government Law enforcement agencies to help us preserve our bridges”, he said.

The Minister emphasized that the aspect of stopping people from trading under the bridges, was a collective task and effort, as government put laws asking people to stop selling under the bridge, buyers should as well automatically stop patronizing sellers at such unhealthy locations.

“This is also a generational effort, people should stand and say; this kind of a thing will not happen on our bridges again, I refuse to sell and I also refuse to patronize, no more trading that endangers lives again, the purpose is to ensure that this infrastructure continues to deliver for us”, he said.

The Deputy Governor of Lagos State, Dr. Olufemi Hamzat warned the citizens to desist from doing business under the bridge and live the right way for the interest of others.

The Deputy Governor said that the state government was willing to support in any way that will ensure quick compliance by citizens to stop illegal use of the under bridges.

Olufemi said: “The State Government will be available to monitor the process and provide assistance where necessary to ensure that the contractor have a smooth operation. In the aspect of people trading under the bridge, we will communicate with appropriate department to ensure that the issue is addressed.”

Speaking on the extent of the damages, Managing Director, Messrs Buildwell Plants and Equipment Industries Ltd., Engr. Enile Aboohabib said that most of the bearing of the bridge needs to be changed, Jacketing of damaged piers, removal of damaged expansion joints, unclogging of drainage gullies e.t.c some parts he said are about to collapse if not for the quick intervention of the Federal Government.

Enile said: “we have commenced the rehabilitation exercises but now we are shifting some of our materials to the newly burnt Ijora section of the bridge as directed because of its busy nature than the Agbogbon section, the scope for total completion will be by June 2023.

“We are committed to the vision of the Federal Government and we have record of delivering project in record time. We have categorized the affected areas into 1 to 5 and work is ongoing. Now that we are allowed to close the bridge completely it will make the work easier and faster”.