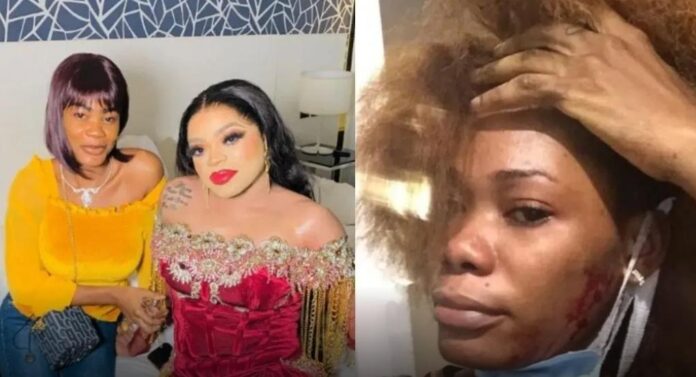 Video of Bobrisky Assaulting one of the ladies that tattooed his photo on their skin as gone viral after it surfaced on Instagram.

Before releasing the video as evidence of being victimized by Bobrisky, the lady identified as Oye Kyme on Instagram called out the crossdresser and accused him of beating and maltreating her.

The Ivorian lady also posted photos of her blooded and wounded body to back up her claims.

She made it known that Bobrisky abused and assaulted her while she lived with him. She claimed he hit her over a small issue.

In the viral video, Bobrisky was heard cursing the lady and forcefully throwing her out of his house.

He was also heard claiming to be helping her and does not care if she calls him out on social media.

Watch the shocking video below:

Read some comments below:
dianabrandy7: Bob is always having issues with people he claimed he help clout chaser bob and clout na 5/6.

cianna_____ : He will come back and disguise with giveaway.

iwualaonyinyeyaddy: I think it’s now obvious that Bob has been ly.ing about helping people