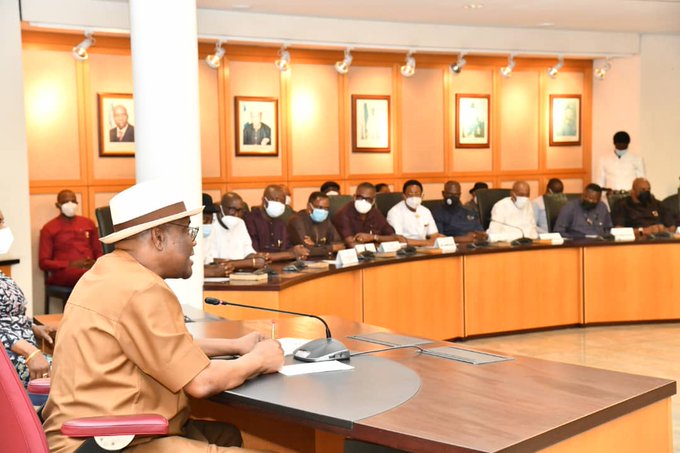 Governor of Rivers State, Nyesom Wike on Tuesday, received the recently elected Chairmen and their deputies in Port-Harcourt.

It was an appreciation visit on the part of the new electees, having been voted into office.

Governor Wike urged them to use their positions as an opportunity for greater service to their constituents.

The Governor also emphasised the need to stay within their areas of jurisdiction and render service to the people and also appreciate the Peoples Democratic Party, (PDP), the platform upon which they all got their mandates.

The Rivers State Governor revealed these on his official Twitter handle, @GovWike on Tuesday.

@GovWike wrote:”Today I received an appreciation visit from the recently elected Chairmen and Vice Chairmen of the 23 LGAs in Rivers State. “I urged them to see their positions as an opportunity and use it diligently for the service of their people.

“They were encouraged to reside in the locality they were voted from rather than clustering in Port Harcourt “They were also urged to appreciate the @OfficialPDPNig by fostering unity in the party & working to enhance the chances of the PDP in their various LGAs.”

Recall that in the recent local government elections held on Saturday, the PDP recorded a resounding victory, winning all 23 Chairmanship and Councillorship positions in Rivers State.