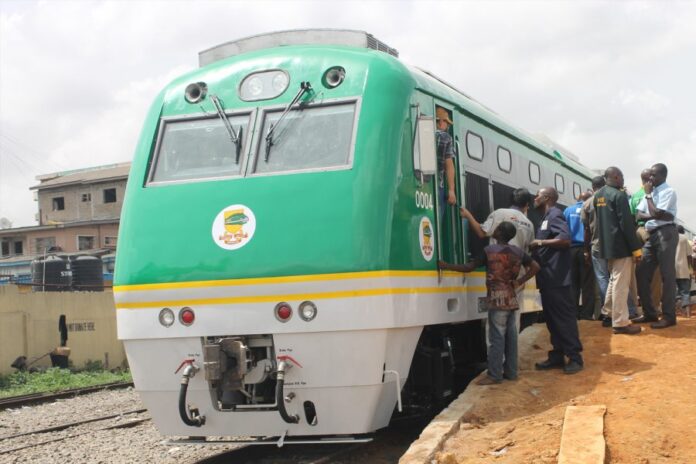 No fewer than 42, 000 passengers used the Lagos – Ibadan rail corridor in June, few weeks after commissioning by President Muhammadu Buhari.

The disclosure was made, Friday, by the Minister of Transportation, Rotimi Amaechi, shortly after an inspection tour of the multi-billion naira critical rail corridor.

TheFact Nigeria reports that the inspection tour is the first after the landmark commissioning of the economy-boosting project.

“On the Lagos-Ibadan trains, 42,000 passengers were moved in June.

“We expect the figured to increase in the coming months because if we can move 42,000 in the month that we started, then the figures will increase as more people become aware of the train services between Lagos and Ibadan”, Amaechi said.

The minister used the occasion to clear the air on the incident on the Abuja – Kaduna rail, which he blamed on lack of maintenance.

This, he further noted, was due to availability of spare parts from China, which construction company, the China Civil Engineering Construction Corporation (CCECC), was awarded the contract.

Amaechi, however, assured that some spare parts that were being expected for the Lagos-Ibadan trains, will be used for the Kaduna-Abuja train locomotives upon arrival in the country.

“After the last breakdown of the Kaduna-Abuja train, I instructed the Nigerian Railway Corporation (NRC) to rest that particular locomotive. I am surprised that there was a delay related to another breakdown in the early hours of today.

“The issue with the break down of the Kaduna-Abuja train is due to lack of maintenance which is attributable to a lack of spare parts from China. We have written to Mr President on this issue and he has graciously approved the purchase of spare parts for the Lagos-Ibadan trains.

“Very soon, the Chinese people will supply us with enough spare parts for the Lagos-Ibadan rail. By the time they do that, we will be forced to use some of these spare parts for the Kaduna-Abuja trains and hopefully, the issue of incessant breakdown of the trains will be resolved”, Amaechi said.

Speaking on the level of completion recorded on the train stations, the former Rivers State Governor clarified that, the recent kidnap of some Chinese officials in Ogun State, delayed the station’s completion.

Illegalities In MDAs Responsible For High Cost Of Governance -ICPC

WHO, UNICEF Kick Against Exploitative Marketing Of  Formula Milk