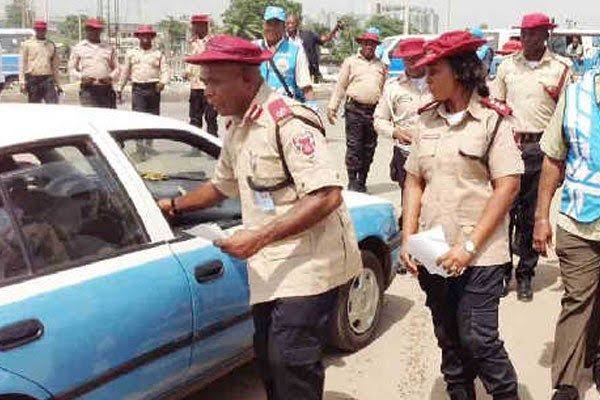 15 officials of the Federal Road Safety Corps, FRSC, have been arrested through a joint security operation led by the Independent Corrupt Practices and Other Related Offences Commission, ICPC, for allegedly extorting monies from motorists on highways across the country.

A statement jointly signed by the Spokespersons of the anti-graft Commission and the FRSC, Azuka C. Ogugua, and Bisi Kazeem respectively, reveals that the officials were arrested on Thursday, 12 August, simultaneously in Adamawa, Gombe, Ondo and Osun States, with the extorted money on them, during the enforcement of the sixth phase of ‘Operation Tranquility’ by officers of ICPC, FRSC and the Department of State Services (DSS).

TheFact Nigeria recalls that the FRSC Corps Marshal, Dr. Boboye Oyeyemi had, in 2019, approached the ICPC Chairman, Prof. Bolaji Owasanoye, for collaboration to curb the unwholesome practices by Road Safety officials on the highways, particularly the extortion of motorists.The collaborative exercise, which was aimed at arresting FRSC officials who extort motorist on the highways, yielded positively as over 100 FRSC officials have been arrested across the country and huge amount of funds taken as bribes have been recovered.

According to the ICPC-FRSC joint statement, this latest operation resulted in the arrest of seven officials along the Jimeta Township Routes and Yola Expressway in Adamawa State, with some money recovered from them as they were raided while extorting motorists.

Furthermore, the members of Operation Tranquility arrested four FRSC officials in Gombe State, along Gombe Township routes, while four others were arrested within Ikare Township routes in Ondo State.

The team reported that the officials would sometimes enter vehicles belonging to motorists to negotiate and collect the bribes to avoid being seen by passers-by as well as employ the services of local government revenue collectors as agents to cover their illicit acts.

It was also found in the course of the operation that two patrol teams in Adamawa and Gombe States respectively, were not involved in any corrupt act as they were caught under surveillance checking documentations and ensuring road worthiness of vehicles.

‘All those arrested have been granted administrative bail by the Commission, however further investigation activities are still on-going to ensure that those culpable are appropriately punished’, the statement read.