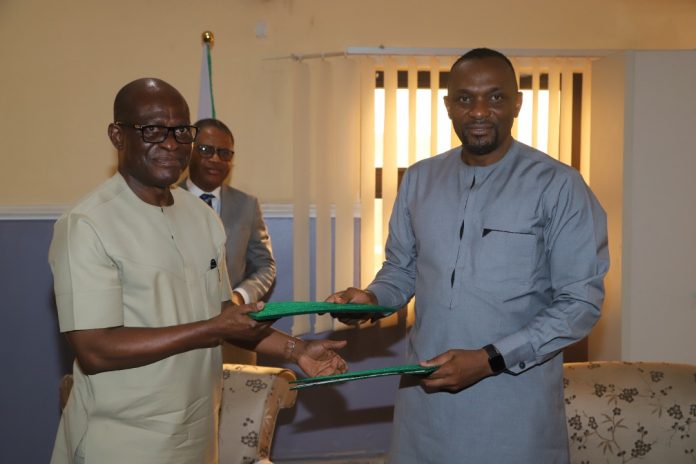 Information obtained from the NIPC Newsletter on Thursday also said that the signing took place at the Commission’s Headquarters in Abuja.

TheFact Nigeria recalled that in January this year, as a follow up to this signing, the NIPC Intelligence reported that EECD Ltd paid a visit to the Commission with a team from EZDA, a global economic zone advisory, where they both expressed interest in partnering with the Commission to further promote the project estimated to cost over US$430m.

The EEC is a 9,464 hectares Special Economic Zone that is planned to connect 11 states of South-East and South-Southern Nigeria including Edo, Delta, Bayelsa, Rivers, Akwa Ibom and Cross River States.

Other States involved are Ebonyi, Enugu, Anambra, Imo and Abia.

CEO, EECD, Mr Darl Uzu who signed on behalf of EECD, disclosed that the project would leverage its world class infrastructure to become a global business hub in the region.

Mr Uzu said that the EECD offered generous incentives from Local, State and Federal Government to investors doing business in the city.

The incentives include a complete holiday from all Federal, State and Local Government taxes, rates, and levies, duty free importation of capital goods, machinery/components, spare parts, raw materials and consumable items in the zones.

Others are a 100% foreign ownership of investments, 100% repatriation of capital, profits and dividends, a waiver of all imports and export licenses and a waiver on all expatriate quotas for companies operating in the zones, amongst others.

Actor, Richard Mofe-Damijo Laments On ‘The State Of The Nation’

Witness In Ex-Governor Trial: No Trace Of Contractors Who Received N1.7bn