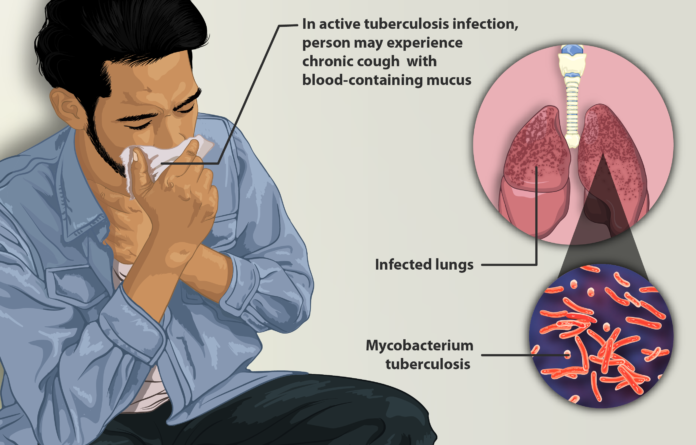 The National Coordinator, National Tuberculosis, Leprosy and Buruli Ulcer Control Programme (NTBLCP), Dr. Chukwuma Anyaike has decried the low turnout of people for tuberculosis screening and treatment due to myths linking it to witchcraft.

Anyaike disclosed this on Monday, March 28, 2022, at a press briefing in Abuja.

TheFact Nigeria gathered that insufficient information about tuberculosis, its causes and symptoms gave breeding space for misconceptions and myths, therefore there was need for aggressive campaign against the disease, especially at rural and densely populated areas where it is prevalent.

The NTBLCP Helsman explained that, many people, because of the stigma and discrimination tend to run away from tuberculosis treatment. He further said, most of the patients give fake information and outrightly say they do not want treatment, while others refused to continue treatment following reactions to the drugs.

Highlighting the government’s efforts in assisting tuberculosis patients come out of their shell, Anyaike said:
“As a National program, we have put in several mechanisms: one is creating awareness, counseling them individually. with support from global fund and the American government, some incentives are also being given to them.

“Because most times, they find it difficult to come for treatment because of the cost implications, we are also thinking of decentralizing to reduce transportation burden and enable them come for treatment”, he said.

Giving a background of tuberculosis prevalence in Nigeria, Anyaike said:
“On annual basis, it is estimated that we have above 440, 000 new cases in Nigeria, and since the inception of the programme in 1989, we have been struggling to make that breakthrough. even though in 2020, in the midst of Covid-19, Nigeria was able to notify 138,591 new cases and that progress made us stand out globally.

“In 2021 we were able to notify 207,000 new cases, a 50% increase from what we had in 2020. However, when we looked at the cases, we realised that children were being left behind and we were getting lots of resistant cases.

To tackle this, the NTBLCP Boss disclosed that they were collaborating with, the Family Health, to get those children who are malnourished at welfare clinics, because, according to him, “we have evidence that if we take the stool of any malnourished child for gene expert screening, we stand a better chance of getting those children early enough and placing them on treatment”.

He also disclosed that the country was coming up with more digital x-rays with artificial intelligence which will help physicians be able to track the children and place them on treatment.

He further explained that NTBLCP was building the capacity of medical doctors and Healthcare workers at the community level for them to be able to identify those children and place them on treatment.

Anyaike, in his concluding remarks, explained that: “Tuberculosis is here with us, it is preventable, it is treatable and it is curable, it is not caused by any witchcraft, it is caused by a bacteria, Mycobacterium tuberculosis and the treatment is free.

“If you have been having a cough for more than two weeks, and have taken antibiotics without improvement, call our toll free number 3340 and you’ll be attended to”, he said.

“As at last week, Nigeria recorded 659 confirmed cases of Lassa Fever over 23 states with a Case Fatality Rate of 18.7%.

He further disclosed that NCDC was keeping an eye on the Cerebrospinal Meningitis outbreaks on the country’s borders in the north and was also investigating reports in Zamfara with regards to the disease.

Concluding his remarks, the NCDC Boss, urged the Public to take the Covid-19 vaccine stressing that:
“It is our best chance at getting back to normalcy as soon as possible as a country and we must work collaboratively to ensure it is done in the quickest possible time frame”.

On a positive note, the Director, Hospital Services, Federal Ministry of Health, Dr. Ngozi R.C. Azodoh, noted that the country had not recorded any death from Covid-19 in the last three weeks.

She added that the proportion of confirmed cases recorded with associated or underline medical condition also called comorbidity for the week under review was 55% and there was no surge in patients requiring oxygen during the period in review.