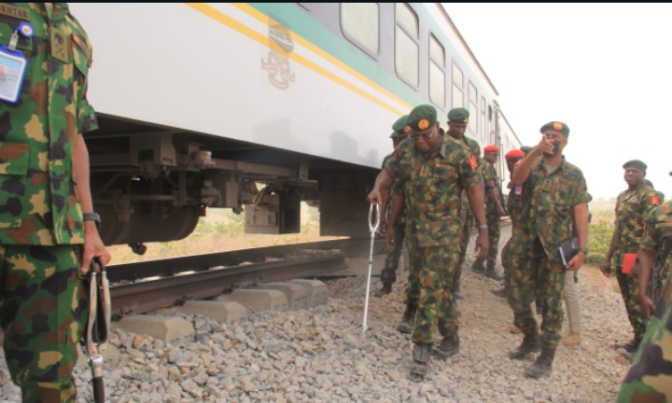 The Chief of Army Staff COAS, Lieutenant General Faruk Yahaya, has ordered troops of the Nigerian Army, NA, and other security agencies to intensify their search and rescue operations to rescue kidnapped victims of the recent Abuja-Kaduna train attack.

The Army Chief gave the order today at the scene of the attack where he assessed the security situation around the general area of the attack. He inspected the attacked train as well as the rail track to evaluate the degree of damage.

TheFact Nigeria recalls that terrorists, on Monday night, attacked a Kaduna-bound train in Northern Nigeria. The train left Abuja at about 6:00 p.m. and was heading to Kaduna when it was attacked between Katari and Rijana communities. It was gathered that the terrorists planted explosives on the train track and immobilised it before firing gunshots at passengers as they tried to open the doors. The incident was confirmed by both the Kaduna State Government and the Nigeria Railway Corporation.

Although the exact number of people on the train at the time of the incident had yet to be confirmed, there were media reports that over 970 people were aboard the train.

According to a statement issued earlier today by the Kaduna State Commissioner for internal security and home affairs, Samuel Aruwan, the State government said the evacuation of the trapped passengers had been concluded but search and rescue operations continued.

At the scene of the attack today, Gen. Yahaya also assured Nigerians that the troops will be undeterred and vehement in the fight against banditry and other forms of criminality.

He further urged members of the surrounding communities and all Nigerians to continue to avail troops with credible information to enhance their operations across the country.

The COAS observed that the attack reverberates the need for critical stakeholders to review the security of railways across the country in order to achieve the desired security architecture for railway transportation.

He was accompanied on the assessment visit by some principal staff officers of the Army Headquarters and the General Officer Commanding 1 Division.