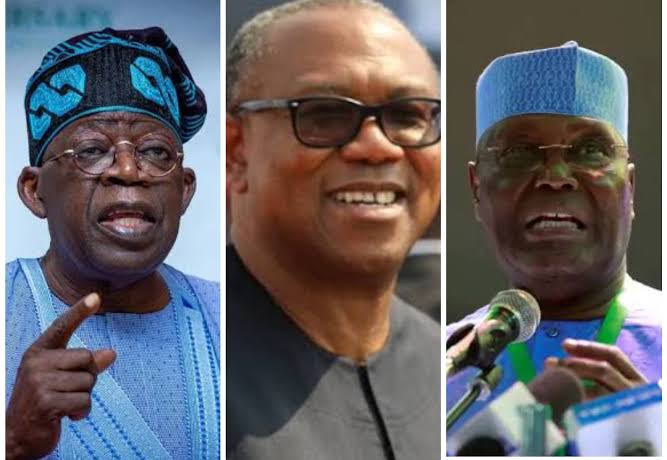 The battle for who will succeed President Muhammadu Buhari after the 2023 presidential election is gathering momentum in Nigeria with 60-year old, Peter Obi, 70-year old, Bola Tinubu, and 75-year old, Atiku Abubakar as lead candidates.

The politicians are vying to be Nigeria’s next president, promising pro-business policies to revamp Africa’s largest economy by fixing its oil sector and curbing widespread security threats.

The ruling All Progressive Congress (APC) chose Bola Tinubu as its candidate, the main opposition Peoples Democratic Party (PDP), chose Atiku Abubakar as its candidate, while the Labour Party chose Peter Obi as its flagbearer; all battling to succeed President
Muhammadu Buhari in the next year’s general elections.

Certainly, the winner would inherit an uninspiring economic and security challenges that are currently threatening the existence of the country.

In a Democracy Day broadcast on Sunday, Buhari expressed joy over the peaceful primaries conducted by all the political parties and appealed for an issued based campaigns.

“Recently, all registered political parties conducted primaries to select their candidates for the 2023 general elections. These primaries were peaceful and orderly. Those who won were magnanimous in their victories. Those who lost were gracious in defeat. And those aggrieved opted to seek judicial justice as opposed to jungle justice.

“I followed the party primaries closely from the state level to the Presidential level. I was very impressed to see across all the political parties that, most candidates ran issued based campaigns. The language and tone throughout were on the whole measured and controlled.

“Another positive that came from the 2022 party primaries was the significant increase in women and youth particularly across all parties. I was very pleased to see this development. This augurs well for the future. These trends clearly show the level of maturity our democracy has achieved in the last 23 years.

“As we move into the general election campaign season, we must sustain this mature attitude to campaigning and ultimately, voting. We must never see it as a “do or die” affair. We must all remember democracy is about the will of the majority. There must be winners and losers.

“I will therefore take this opportunity on this very special day to ask all candidates to continue running issue focused campaigns and to treat opponents with dignity. As leaders, you must all showcase high character and never forget that the world is watching us and Africa looks up to Nigeria to provide example in governance. The tone you set at the top will surely be replicated in your followers”, he said.

He assures his commitment for free, fair and transparent electoral process.

“I remain committed and determined to ensure that the new President is elected through a peaceful and transparent process.

“I am also promising you a free, fair and transparent electoral process. And I am pleading with all citizens to come together and work with Government to build a peaceful and prosperous nation”, he said.