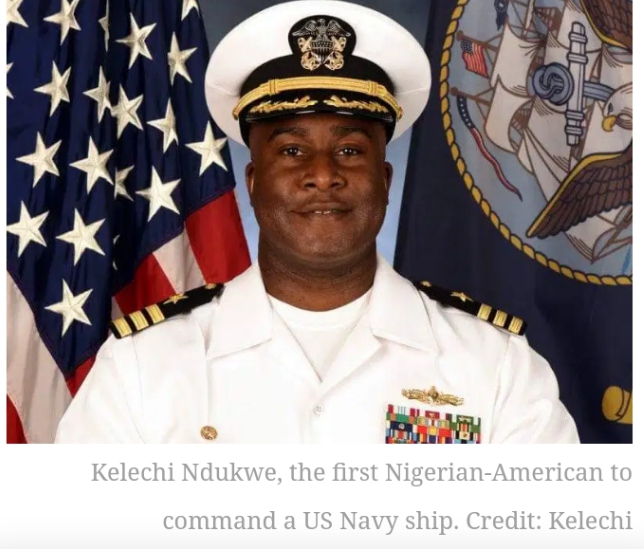 The U.S. Mission in Nigeria has congratulated Nigerian-American, Mr Kelechi Ndukwe, on his appointment as Commander of a U.S. Navy ship, USS Halsey (DDG-97). By his appointment, Ndukwe has become the first ever Nigerian to achieve the feat.

Ndukwe, who was appointed last Thursday, is an alumnus of the University of Notre Dame and the U.S. Naval War College.

A graduate of chemical engineering, Ndukwe replaces DeVere Crooks who had commanded the ship since November 2019, and whom he deputised.

The appointment, TheFact Nigeria gathers, catapults Mr Ndukwe to  zenithal heights of his 18-year career in the US Navy, which he started as an auxiliary officer of the USS Thorn, one year after he obtained his master’s degree in national security and strategy studies from the US Naval War College.

Mr Ndukwe, who graduated from the University of Notre Dame in 2002, has also worked in the office of the chairman of the joint chiefs of staff (CJCS), America’s highest-ranking military officer.

After graduation from the University of Notre Dame in 2002, Ndukwe  worked in the office of the Chairman of the Joint Chiefs of Staff, CJCS, America’s highest-ranking military officer.

Mr Ndukwe, during the handing over ceremony, was full of gratitude to his parents for thier “example of hard work and dedication you laid for your children”, having recalled how they (his parents) migrated to the U.S. from Nigeria in 1977 as “poor college students with hopes and dreams.”

Before this laudable achievement, Mr. Ndukwe had served as the fire control officer of USS Normandy in Norfolk from 2004 to 2006.

He had also served as a weapons officer and combat systems officer of USS Fitzgerald in Yokosuka, Japan, from June 2010 to December 2011. Likewise, he was a navy congressional liaison officer in Washington DC, from July 2006 to August 2008.

According to his bio on the Foundation for Defense Democracies, FD he had served in numerous warships around the world, including in the Mediterranean Sea, Horn of Africa, Arabian Gulf, and Western Pacific Ocean.

USSD: Nigerians To Pay N6.98k per Transaction From Today