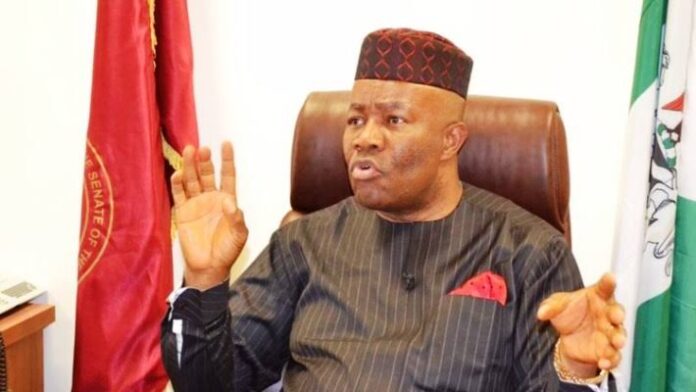 The Minister of Niger Delta Affairs, (MNDA) Godswill Akpabio, has directed that all contracts awarded by the Niger Delta Development Commission (NDDC) must be verified  before payment.

The Minister gave this directive when he flagged off Project Site Verification exercise by NDDC Forensic Auditors  in the nine states of the region in Akwa Ibom State.

Akpabio  also ordered that all contract papers for payment must be submitted to field forensic auditors for verification before the commission will pay.

He revealed that president Muhammadu Buhari  has approved the purchase of 33 vehicles for the Forensic Auditors to enhance movement into 9 States of the Niger Delta region.

Akpabio revealed that the exercise, which was in line with President Muhammadu Buhari’s desire for the development and sustenance of peace in Niger Delta region would establish amongst others, the exact status of all contracts for projects and services classified into completed, uncompleted, abandoned, ongoing and non-existing in all the constituents of the States during the period under review.

President has approved the purchase of 33 vehicles for the Forensic Auditors to enhance movement into 9 States of the Niger Delta region.

According to the Minister, “the Auditors would be expected to submit a comprehensive report within 3-4 months to be sent to Mr. President as soon as their work is accomplished, you have seen the readiness of the team, it is suicidal to send these people to undertake this task without adequate security back-up, that is why there is need for security apparatus to be set-up.”

He however lamented that NDDC as an institutional structure established to spearhead the development of the region but for inexplicable reasons, has failed to deliver on its mandate despite the huge sums of money budgeted and expended over the years for this purpose by the Federal Government.

He recalled that following the approval of Mr. President and Federal Executive Council (FEC) for the Forensic Audit of the NDDC, the Lead Forensic Auditor was inaugurated on the 29th September 2020 and subsequently sixteen (16) Field Auditors as well as the Forensic Audit Security Committee to provide security protection for the audit exercise in the states.

According to the Minister, the mandate of the Forensic Audit amongst others are to undertake a complete forensic Audit Exercise of the NDDC projects across the Nine States of the Niger Delta Region covering 2001-2019; responsible for the review of governance and organizational structure of the Commission as well as develop operational guidelines and a fit for purpose organogram that would transform the NDDC to globally competitive institution and block leakages.

He stated that “you are all aware of the interest generated by both stakeholders and other interest groups when Mr. President granted approval for this audit exercise as a result, NDDC became the most talked about establishment in recent time. The Auditors have so far identified over 12,000 projects scattered across the region to be physically verified in the coming days.”

“I am aware that some contractors have gone back to sites they abandoned so many years ago after the approval for the audit exercise, this is one of the benefits of this forensic audit of the Commission”, he continued.

The Minister hinted that the President would be commissioning about 64 classrooms and appreciable road projects across the 9 States of the Niger Delta Region undertaken by the NDDC in the next few weeks while work is ongoing on the East-West Road, adding that the Ministry also embarked on several empowerment programmes to assist the youths and people of the region.

The Minister expressed profound appreciation to Mr. President for his unflinching desire to reposition the NDDC to deliver on its mandate to the benefit of the Niger Delta region and Nigerians and implored the good people of Niger Delta region to cooperate with the Field Auditors in this verification exercise so as to ensure the upliftment of the socio-economic status of the region.

Earlier, the Lead Consultant Forensic Auditor, Joshua Olumuyiwa Basiru stated that the verification exercise is a national assignment geared towards repositioning the Commission for greater development course. He noted that it is the responsibility of all to ensure that the forensic exercise is successfully executed to improve transparency and accountability in NDDC.

He said that “we must not allow this project to be scuttled by those who have benefitted in the past or those who are currently benefiting unjustly from the loopholes as well as the profligacy exhibited by its previous management teams to the detriment of the vast majority of Niger Deltans and therefore do not like to see change coming to NDDC”.

He noted that despite some challenges encountered during documentation and data extraction, remarkable progress have been made in line with the Forensic Audit Terms of Reference.

Rear Admiral, Bamidele Oluwagbamila, in charge of the security apparatus assured that the mandate of providing adequate security for the Field Forensic Auditors in the course of their duty, will be effectively carried out.

He therefore appealed to people eager to thwart this exercise to change their minds as any unwarranted attempt would be met with appropriate response from the security team.

Dangote Cement To Pay Over N97bn In Corporate Tax For 2020