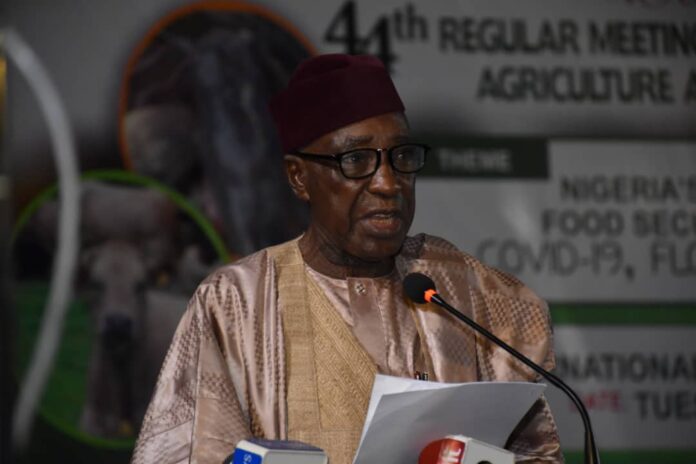 The Minister of Agriculture and Rural Development, Alhaji Muhammad Sabo Nanono has revealed that the Ministry recently launched an online portal to ensure efficient and effective monitoring of Federal Government intervention in the Agric sector.

He disclosed this while speaking at the opening ceremony of the 44th council meeting of the National Council on Agriculture and Rural Development (NCARD), held in Abuja yesterday.

TheFact Nigeria gathered that some of the previous government interventions did not reach farmers at the grassroots.

Nanono stated that the database will be “a platform for the Federal Government interventions going forward, putting an end to ghost schemes and other unscrupulous practices in the agricultural industry.”

According to him, the initiative would capture the bio data of the farmers and link with geographical information of their farmed plots, crops and the volumes of production in the country.

The Minister revealed that although they initially set out to capture the data of 2.4 million farmers across the country, the results from the exercise had encouraged the Economic Sustainability Plan Team to expand the data capture to 10 million farmers.

“The challenges brought by the emergence of the Covid-19 Pandemic, floods and insecurity has galvanized the government into setting up necessary structure to address infrastructural deficiency ,technology gaps, security challenges and extension inadequacy.

“This approach is believed to be the right one for achieving our desired economic diversification and national development,” he said.

Nanono stated that agricultural productivity can only improve through mechanization of production activities. Therefore, in their effort to improve agricultural production profile of the country, they entered into a partnership with the government of Brazil through one of their foremost technology transfer, the Fundacao Getulio Vargas (FGV).

He noted that the NCARD would promote the existing policies, programmes and projects at the national and sub- national levels for the purpose of entrenching synergy, best practices, entrepreneurship, livelihood and growth in the sector.

In a bid to put an end to the incessant farmers/ herders clashes in the country, Nanono disclosed that they have embarked on a National Livestock Transformation Plan (NLTP) to transform the country’s livestock sector from a nomadic – dependent sector into an organized ranching one.

“22 states and Federal Capital Territory have registered with the NLTP Office. Seven of these 10 states have also earmarked about 19 Grazing reserves for the implementation of the NLTP, with a total land size of approximately 400,000 hectares,” Nanono revealed.

According to him, it was therefore safe to say that NLTP, when fully implemented will bring an end to the incessant clashes between the farmers and herdsmen as the same time introduce the herders to the modern way of raising cattle , with all added benefits of improved feeding ,animal and human ,genetic improvenment,value addition and better socio – economic standing for all participants.

The Permanent Secretary of the Ministry, Dr. Ernest A. Umakhihe.