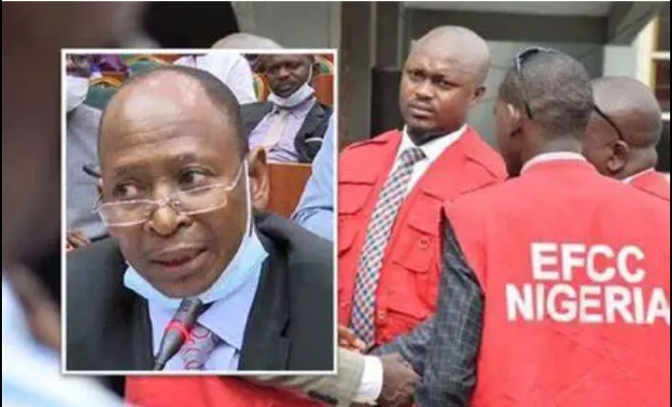 The High Court of the Federal Capital Territory in Maitama, Abuja has ordered the remand of the suspended Accountant-General of the Federation, AGF, Ahmed Idris, over alleged N109 billion fraud charges.

TheFact Daily recalls that the Minister of Finance, Budget and National Planning, Mrs. Zainab Ahmed, in a letter dated 18 May 2022, suspended the AGF, who, at the time was in Kano, to allow unhindered investigations into an N80 billion fraud allegation. In June, it was reported how the anti-graft agency confiscated multi-billion naira assets linked to Mr Idris’ suspected proceeds of crime.

According to count one, the embattled AGF accepted a gratification from one Olusegun Akindele, in the aggregate sum of N15,136,221,921.46, as a motive to accelerate the payment of 13% derivation to the 9 oil producing States in the Federation, through his (AGF’s) office, thereby committing an offence contrary to Section 155 of the Penal Code Act Cap 532 Laws of the Federation of Nigeria 1990 and punishable under the same section.

According to count eight, the AGF together with Godfrey Olusegun Akindele, who was the Technical Assistant to the AGF, between February and November 2021, in Abuja, and entrusted with a certain property, to wit: N84,390,000,000(Eighty-Four Billion, Three Hundred and Ninety Million Naira), committed criminal breach of trust in respect of the said property by dishonestly receiving the said amount from the Federal Government of Nigeria through Godfrey Olusegun Akindele trading under the name and style of Olusegun Akindele & Co., and “thereby committed an offence punishable under Section 315 of the Penal Code Act Cap 532 Laws of the Federation of Nigeria 1990”.

The defendants pleaded not guilty to the 14 counts charge when read to them during the hearing before the trial judge, Justice Adeyemi-Ajayi.

After the pleas of the defendants were taken, Idris’ lawyer, Chris Uche, SAN, made an oral application for the bail of his client.

However, prosecution counsel, Rotimi Jacobs, SAN, opposed the oral bail application, insisting that it must be done in writing.

However, Uche pleaded for the release of his client pending the filing of a written application for his bail, urging the court to consider that the defendants had been on administrative bail granted them by the EFCC.

“Since there is no complaint that they have breached any of the conditions, they should be allowed to continue on that bail,” Mr Uche said.

In a ruling, the judge held that “the court is not a puppet to dance to the rhythm of public opinion.

“In the interest of justice for all, they are remanded in prison custody,” Justice Adeyemi-Ajayi ruled.

The suit was adjourned until July 27 for the hearing of the defendants’ bail application.