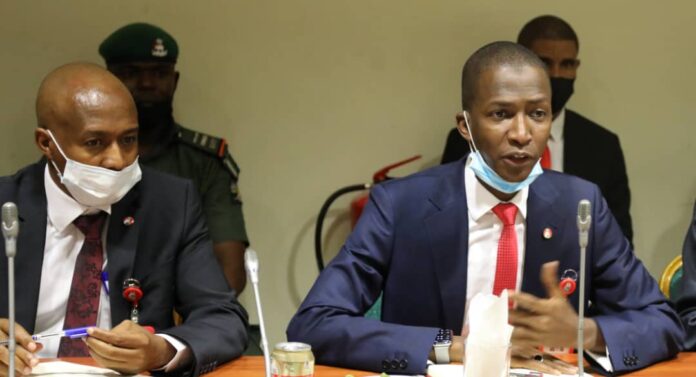 Members of the House of Representatives Committee on Financial Crimes have offered to support the Economic and Financial Crimes Commission, EFCC, under the leadership of Abdulrasheed Bawa, to achieve its mandate of ridding Nigeria of corruption.

The pledge to support the anti-graft agency was made today by the Ibrahim Abdullahi Dutse-led Committee at a meeting with the EFCC boss at the National Assembly, Abuja.

TheFact Nigeria notes that the EFCC Chief, while featuring on the Channels Television program, Sunrise Daily, earlier today, had said that corruption was fighting back, and disclosed that he had been receiving death threats from high profile Nigerians in his efforts at stepping up the campaign against corruption.

The meeting, which coincided with the first one hundred days of Bawa in office as EFCC Chairman, offered him the opportunity to brief members of the Committee on his vision for the EFCC as well as some of the reforms initiated by him with the aim of improving the efficiency of the agency.

“Today’s meeting is coming on my 100 days in office. We have achieved quite a lot in terms of the promises that we made, in terms of restructuring and vigorously prosecuting cases… it is still a work in progress, but we have made a lot of inroads” Bawa said.

Presenting an infographic brochure of his achievements in the first 100 days, Bawa disclosed that he was driven by the consciousness to steer the anti-graft war away from fighting corrupt people, to fighting corruption adding that it was far cheaper to prevent corruption.

To this end, he intimated that the Commission had stepped up its prevention efforts with the resuscitation of the interfaith anti-corruption committee comprising Muslim and Christian clerics charged with the mandate of delivering a preaching and teaching manual for adherents of both faiths.

He also disclosed that the Commission was working towards executing a corruption risk assessment for agencies under the Ministry of Petroleum Resources.

Additionally, Bawa told the lawmakers that the Commission is poised to improve the capacity of its personnel through training. He further disclosed that the EFCC Academy is currently under renovation to position it to effectively achieve its capacity development objectives.

Responding to a question by a lawmaker, the EFCC boss promised to look into the possibility of organizing training programmes for the lawmakers to keep them abreast of the workings of the Commission, upon the completion of the ongoing renovation work at the EFCC Academy.

Bawa concluded by thanking the lawmakers for the invitation to meet with them, assuring that he would always be available to interface with them considering the important roles they play in providing appropriation and other legislative support to the Commission.