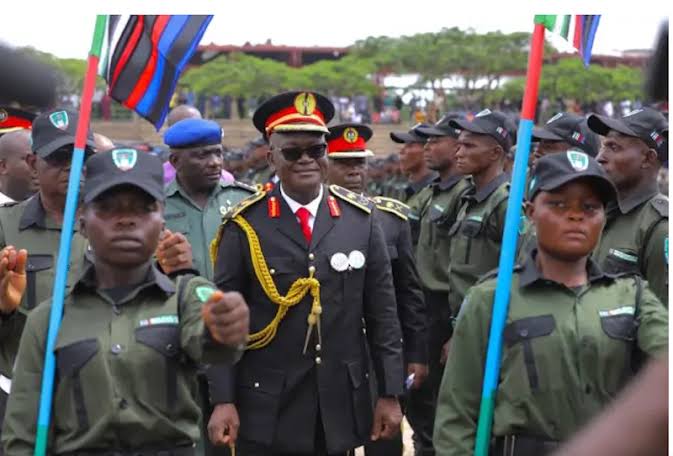 The Benue State Government is training more State Community Volunteer Guards with the charge to protect communities of the state from external invaders.

Ortom who was accompanied by the Senator representing Benue North-East Senatorial District, Senator Gabriel Suswam and other top government officials participated in the shooting training.

Addressing the trainees who were in high spirits, Governor Ortom commended them for exhibiting a high level enthusiasm and commitment which he noted shows their readiness to defend and protect Benue communities against invasion.

He charged the trainees not to use the training they have acquired and the legal weapons that would be provided for them after their inauguration to engage in criminal acts, warning that anyone who does so would be prosecuted.

Ortom’s Chief Press Secretary, Nathaniel Ikyur in a statement said, the Governor told the trainees that their recruitment, training and eventual inauguration were properly backed by a law that was enacted by previous administrations, stating that the Benue State Government under his leadership, only amended the law to make it more effective in line with present challenges.

Governor Ortom further stated that due to the rising insecurity in the country, the nineteen Northern Governors recently met and resolved to strongly advocate for the establishment of State Police, saying once it was approved, the Volunteer Guards would be the first to be recruited in Benue State.

Senator Suswam on his part, enjoined the Volunteer Guards trainees to abide by their rules of engagement, saying their good conduct was important to convince people that seem to have misgivings about the establishment of the security formation.

He also lauded Governor Ortom for taking the bull by the horn in setting up a security outfit to complement the efforts of conventional security agencies to protect the lives and property of Benue people.

Earlier, Special Adviser to the Governor on Security Matters, Lt. Col. Paul Hemba (rtd) said the Volunteer Guards trainees have already undergone three weeks of rigorous training with the shooting experience being the last, saying the visit of the Governor has boosted their morale.

In another development, Governor Ortom stated that his criticism of the Federal Government was to make the government work better for the people and not to vilify the office of the President as being wrongly perceived by others.

The Governor spoke at the Catholic Youth Centre Church, Makurdi during a Thanksgiving Mass for the healing of Tor Sankera, HRH, Chief Abu King Shuluwa.

He said most of the policies of the Federal Government, which he has kicked against were clearly anti-people, especially those in Benue.

He admonished Christians, especially those in Benue State not to relent in praying for their leaders at all levels so that God would give them the grace to lead in the right direction.

The Governor maintained that although he had the privilege to contribute financially to the medical trip of Tor Sankera abroad, his healing was mainly a result of the prayers of the people, which brought God’s intervention.

Also speaking at the thanksgiving Mass, Senator Suswam expressed gratitude to God for healing the royal father, saying as a father and traditional leader, the First Class Chief needed to be healthy to continue rendering service to his subjects.

The celebrant and Tor Sankera, Chief Shuluwa who was overwhelmed with joy attributed his healing to people’s prayers while his wife, Elizabeth Shuluwa thanked Governor Ortom for his huge financial support to the treatment of the royal father both at home and abroad.

In a homily at the thanksgiving Mass, the Parish Priest, Catholic Youth Centre Church, Reverend Father Shima Ukpanya, VC emphasised the need for believers to sustain prayers for God to make leaders lead in a way that would foster peace, progress and development.

Governor Ortom was later accompanied by Senator Suswam to witness the inauguration of the Redeemed Christian Church of God, RCCG, Benue Region 4 and the installation of Pastor Aderemi Folusayo as Pastor-in-charge of the region.