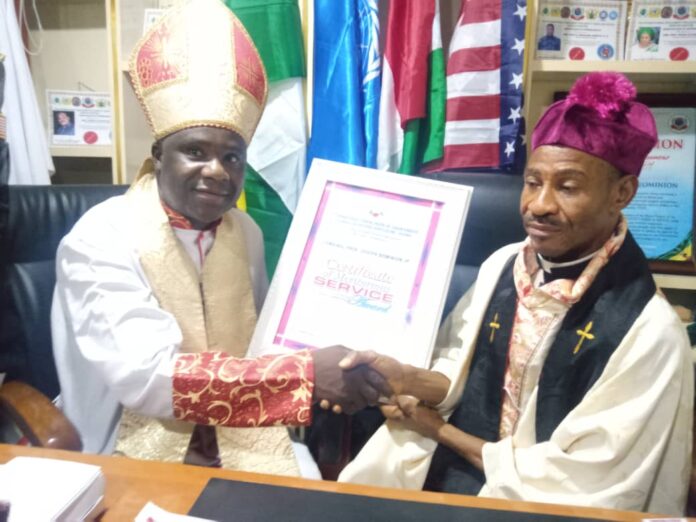 Cardinal Prof. Joseph Dominion JP has won the hearts of many, as religious leaders and Youth showered him with various meritorious awards on peace building in Nigeria and Africa at large.

The first award was presented to him by Idu youth council, on Sunday. Followed by the Nigeria Youth Advocacy for Good Governance Initiative on Monday and Tuesday , the General overseas of the world Harvest Ministries Inc, ArchBishop Prof. Leonard Bature Kawas .

The Archbishop Kawas presented the award to Cardinal Prof. Joseph Dominion JP while paid a courtesy visit to his office in Abuja.

In his remarks , The Archbishop Kawas described the Cardinal Joseph Dominion JP as a true soldier of the Lord Jesus Christ.

“To the glory of God distinguish Gentlemen of the media. Today is a great day ,We have gathered here today to honour a great man, to honour a true soldier of the Lord Jesus Christ , a tireless General who has transverse the length and breadth of the globe for the service of God and for the service of humanity.

The Archbishop Kawas who was sent by the International Communion of charismatic and Evangelical Bishops/ Apostles (ICCEBA) said that the College of Bishops and the international Episcopal Councils take pride in presenting to Cardinal Professor Joseph Dominion JP the prestigious certificate of meritorious service and 21st century leadership award.

“In recognition and appreciation of your Efficient Resource Management, Visionary leadership, outstanding performance and visible contribution to the service of God and Humanity , the certificate is issued here in Abuja the 6th day of December in the year of Our Lord 2020.

” We have a fixed and ascribed our Episcopal Seal Signed by the chief Apostle himself, Dr. Warren Hunter and as the African president. May the Lord God bless you and prosper you and may you use this as a motivating factor to fire on in the service of God and man and to affect your generation positively. The Lord bless you.

“And also the International Community has also asked me to decorate you with the ICCEBA Medal of Honour. This is the highest medal in the College of Bishops ,So in the name of the Father, Son and of the Holy Spirit I decorate you so, in Jesus mighty name.Congratulations”.

Cardinal Joseph Dominion JP while receiving the meritorious and the medal of Honour expressed happiness.

He said It is his humble and privilege returning from Ghana where he has been campaigning for a peaceful Presidential and general election .

” I just came back Saturday morning I learned that people have noticed I was in town. By the Grace of God I’m not based in One Nation , I go all over the African nation because of my appointment and my job .

“When I came in that Saturday and Sunday , Idu youth welcomed me and gave me the first award, yesterday Nigeria Youth Advocacy for Good Governance Initiative came here and they gave me award and today again of all, Great, man of God I’ve heard about all the way from Florida in America .

“I came back to Nigeria I heard about him, also everywhere I go in African country I heard about him, but I’ve never met him, I have not been privileged to meet with him. So just yesterday that we were connected and we talked, so am surprised whether this award was waiting for me”, he said.

He further said that he really appreciate the Council of bishops and the Archbishop himself who approved his nomination and want to tell the general public that whatever you are doing in your small corner be faithful to it and to your God because the record of man cannot take you any where but the record of the Almighty God.

“I appreciate this honour and I make a pledge that I will abide to the aim and objectives of this honour because you don’t give this kind of honour to any kind of person. So we must make sure we don’t abuse such privilege.

In the related events, Archbishop Kawas who celebrated his 25th years Marriage anniversary and the 30th years anniversary of his ministry used the occasion to honour over one hundred dignitaries from all works of life both Religion, Traditional, Political and social class with a meritorious certificate of award and medals of Honour.