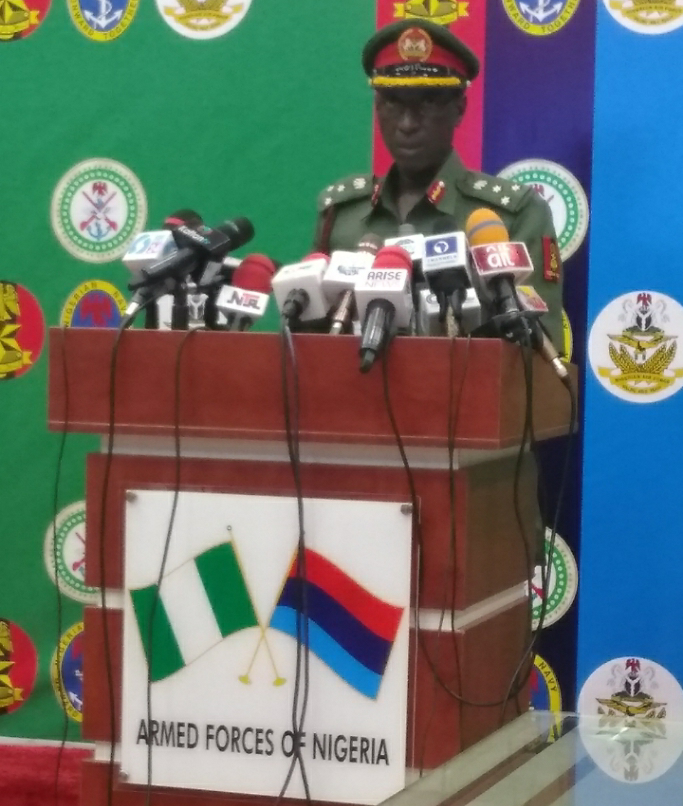 The Chief of Army Staff, Lt. Gen. Tukur Yusuf Buratai, has today, 9th December, charged the newly elected president of the Organization of Military Sports in Africa (OSMA) to bring back the glory of military sports and military sports participation by member countries.

The COAS made this charge at a ceremony marking the formal presentation of the new president of OSMA, who is also the Vice President of the International Military Sports Council (CISM), Nigeria’s Brigadier General Maikano Abdullahi.

Brig. Gen. Abdullahi contested and won election for the president of OSMA against 2 other Generals from Algeria and Guinea.

In his remarks, the new OSMA head admitted that, until his inauguration, he had been unaware of the magnitude of the demands of his office, but expressed optimism that, with the support from the COAS, the challenges of office would be easily surmounted.

He intimated of the commitment of his team to contribute their quota in line with the COAS’s vision of bringing the armies of conflict areas in one harmonious sport for peace and cooperation.

He said this commitment will be flagged off with a seven-team football championship competition involving seven member countries: Nigeria, Niger, Chad, Cameroon, Republic of Benin, Mali, and Burkina Faso, the goal of which is to bring together service chiefs and provide a platform for deliberating on peace and cooperation in the region of West Africa.

In his closing remarks, Lt. Gen Buratai congratulated the new president on his victory in the elections, saying it is a well deserved recognition and a pride, not only to the Nigerian Army, but also to the Armed Forces, and the country as a whole.

He acknowledged the idea of the football competition, saying it was a welcome development, one which will receive the needed support for its execution.

He also expressed hope that Brig. Gen. Abdullahi would use his office to go beyond the African continent in search of sponsors for stadia development, and other sporting activities, not only in the military but the general public, not only in Nigeria, but her neighbours as well, with a view to reviving the glory of military sports. He wished the new president a successful tenor.

OSMA is a continental organization made up of the armed forces of African member countries. It is the African representation of the International Military Sports Council, adopted in 1994 at the 49th CISM General Assembly in Istanbul, Turkey.

The Nigerian Army’s Defence Headquarters (DHQ) on Friday raised the alarm over the purchase of fertilisers by suspected terrorists to manufacture explosives. The Coordinator of...

Justice Ahmed Ramat Mohammed of the Federal High Court Abuja has reserved till February 17, ruling on the request by the Economic and Financial...

The Air Task Force of Operation Lafiya Dole has dealt another blow on Boko Haram Terrorists (BHTs) operating in the North East of the...

Buoyed up by the culture of Transparency, Accountability and Performance Excellence (TAPE) of the current NNPC management, no fewer than (96) prominent and reputable...