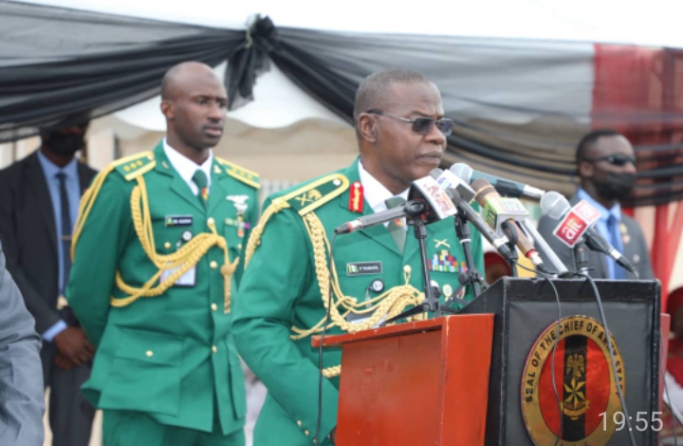 The Chief of Army Staff, COAS, Major General Faruk Yahaya has reiterated that the Nigerian Army, NA, remains resolute, now more than ever before, in restoring peace and security in Nigeria.

The Army Chief stated this yesterday, 4 July, while addressing personnel of the Nigerian Army in a reception held shortly after the Interdenominational Church Service in commemoration of the Nigerian Army Day Celebration, NADCEL, 2021, at Our Lady Queen of Martyrs Catholic Church, Mogadishu Cantonment, Abuja.

The COAS stressed that the NA had been working in synergy with other sister Services and security agencies to surmount the security challenges bedeviling the nation.

He urged the personnel to remain steadfast in prayers, while charging all to be determined and resolute in defeating the enemies of the state.

He further urged all personnel to remain resilient until the insurgents, terrorists, bandits and other criminal elements are completely destroyed and defeated, in order to restore peace and security in the country.

Also speaking, the Chairman Central Organizing Committee, NADCEL 2021, Major General Anthony Omozoje reminded the congregation that the NADCEL is a day set aside to honour our fallen heroes for the supreme sacrifice they have made to keep Nigeria sovereign and united.

Earlier, in his sermon, the Director Chaplain Services (Protestant), Colonel Mairiga called on the citizens to join hands and support the NA to achieve success, noting that the success of the NA is a success for all Nigerians.

He urged all Christians to be united in prayers for the success of the NA and other security agencies for the restoration of peace in the country.