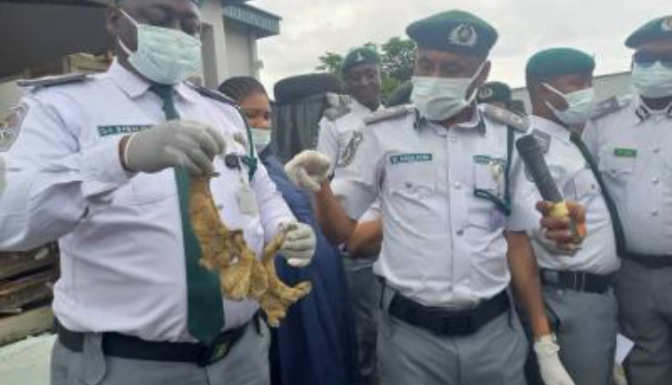 According to the Service’s Area Controller, Sambo Dangaladima, who disclosed this Thursday, while showcasing 16 sacks of the items to newsmen, the genitals have a duty paid value of N216, 212, 813 (Two Hundred and Sixteen Million, Two Hundred and Twelve Thousand, Eight hundred and thirteen naira).

Dangaladima said that upon interception of the seven thousand donkey male genitals, the importers falsely declared them as cow male genitals. However, “after due examination, my export officers discovered they were donkey male genitals”. He added that, “it’s the first time we are seizing this type of item, we will not allow such illegal wildlife trade thrive under our watch”, he explained.

The male genitals were handed over to the Nigeria Agricultural Quarantine Service represented by Deputy Superintendent, Adebimpe Adetunji.

Yusuf, while appreciating the efforts of Customs’ operatives for their “great interceptions”, averred that “we need a lot of synergies to eradicate illegal importation of fake pharmaceuticals”. He pointed out that the inscriptions on the drugs were in Arabic. “How will a common man know this?” he querried.

Reiterating the need for a saner society, Comptroller Sambo Dangaladima beckoned on importers to dwell on the acceptable milligrams of Tramadol allowed for importation, disclosing that as he also handed over one thousand, one hundred and fifty-eight (1,158) packs of Tramadol, each pack containing one thousand tablets, to the National Drug Law Enforcement Agency, NDLEA.

“The required milligram is 100 and it must be properly documented, two hundred and twenty-five is not allowed, we want everyone to follow and key into the system by doing the right thing. We have no other country but Nigeria”, Dangaladima said.

The Operation Officer, NDLEA, in charge of SAHCOL shed, Aminu Sankefi, commended the Service for the continuous synergy in the fight against illicit substances.

“The Comptroller is up and doing, there is adequate communication between us, based on intelligence gathering”, he stated.

OPINION: The Burden Of Leadership At FIRS