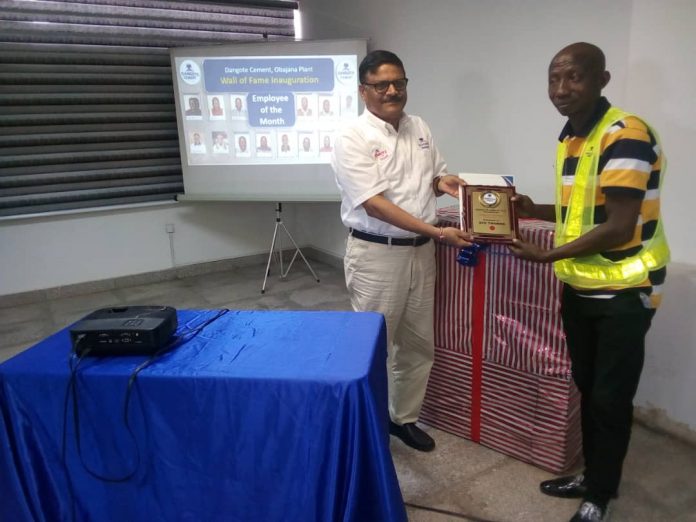 Determined to boost the morale of its employees, the Dangote Cement Plc, Obajana Plant, has commenced its Wall of Fame employee award scheme.

Plant Director, DCP Obajana, Mr. J.V. Gungune Thursday said the programme will motivate the staff to put in their best.

Mr. Gungune said he was optimistic that the award will enable the company to reward hard work and committed staff, and at the same time ginger staff to put in their best.

Speaking at the ceremony, the General Manager in charge of Administration and Human Resources Mr. Haruna Adinoyi congratulated the winners, saying Dangote takes the welfare and performance of staff very seriously.

He urged them to embrace the Dangote Cement core values of customer care, entrepreneurship, excellence and leadership quality.

In his remarks General Manager, Production, Engr John Gwong congratulated the pioneer winners, and urged them to be role models for others.

The Chief General Manager Mr. Ismail Muhammad said the new winners were chosen because they have shown commitment and leadership qualities.

Speaking on behalf of the winners, Ibrahim Suleiman said the staff have been challenged and assured management of their continuous hard work and commitment.

Winners at the award ceremony which was held at the plant at Obajana in Kogi state are: Mr. Ayo Thomas of the Workshop Utility Department, who emerged the overall best, Mr. Samuel Ozovehe Jegede of the Raw Mill Department emerged the 1st runner-up while Mr. Ishiaka Adaji emerged the 2nd runner-up respectively.

Why I May Pull Out From 2023 Presidential Race – Kalu

Obasa Praises LASUBEB, Urges Board Not To Relent