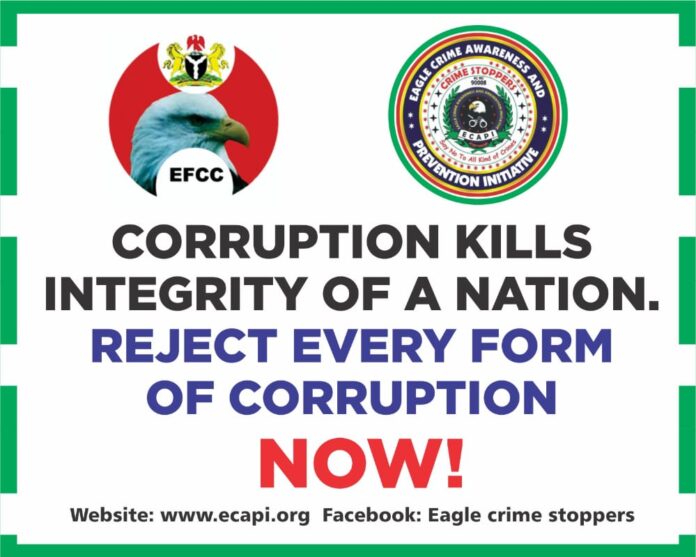 The Economic and Financial Crimes Commission, EFCC has said that it has no relationship with a Non- Governmental Organization (NGO) Eagle Crime Awareness and Prevention Initiative, ECAPI.

A press release issued today by the Commission’s Head of Media and Publicity, Mr. Wilson Uwujaren, reveals that the clarification became necessary following the circulation of a sticker on the social media platform, WhatsApp, by the group advertising its partnership with the EFCC and claiming it has been included in the EFCC database and now have direct access to “Information and activities of the EFCC locally and globally”.

The NGO further claimed that the Commission’s Director of Media “approved the sticker” after a meeting with the group yesterday, June 1, 2021.

The Commission has categorically stated that these claims are not only misleading but false. “The group cannot conceivably have been in the database or have access to the Commission’s information as claimed”, the statement read.

However, the group visited the Commission on June 1 as a follow up to a letter requesting collaboration on corruption prevention which they had sent in earlier.

Representatives of the group met with the Commission’s spokesperson, Mr. Wilson Uwujaren as a matter of courtesy, and were informed that the Commission, though open to collaborating with all civil society organizations genuinely interested in the fight against corruption, have strict procedures for such engagements.

“Unfortunately, this exploratory meeting has been interpreted to mean the consummation of a non-existent relationship”, Uwujaren stated.

The Commission warned that ECAPI had no permission to use either the name or logo of the EFCC in promoting itself or its programmes and should desist forthwith.