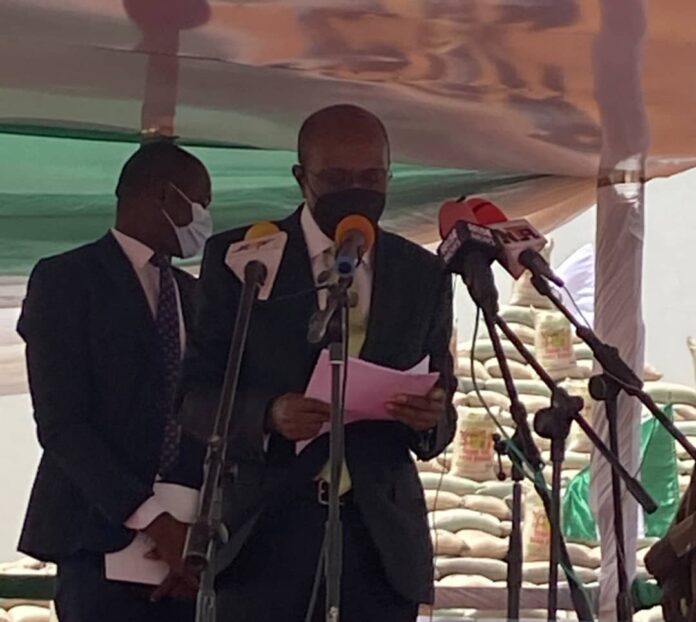 The Governor of the Central Bank of Nigeria (CBN), Mr. Godwin Emefiele says the Anchor Borrowers’ Programme of the Bank, has emphasised the need for all stakeholders to sustain current efforts championed by the Bank to galvanize agricultural production towards meeting the requirements of Nigeria’s growing population.

He noted that Nigeria was naturally blessed to meet her food requirement and had no reason to continually repeat mistakes of the past of neglecting agriculture.

“The rhetoric around neglect of previous years will remain part of our history and the best time to correct those mistakes is now and every stakeholder must contribute their quota to guarantee the realization of these national targets.

“Covid-19 and the associated lockdowns globally have shown that nations only export out of their reserves. Let us start building our own reserves now,” he added.

The flag-off, which comes barely three months after the CBN showcased sky-high pyramids in Minna, Niger State, to highlight its intervention in the maize value chain, also featured the display of pyramids, which were rice harvests brought in by farmers in the state.

He noted that the ABP, which is an essential part of President Muhammadu Buhari’s drive for economic diversification, had improved the fortunes of rural farmers, transforming agriculture into a potential for economic growth.

According to Emefiele, the ABP, in the past five years, had been characterized with huge successes, learning points and challenges. Specifically, he noted that a total of 2,923,937 farmers cultivating 3,647,643 hectares across 21 commodities through 23 participating Financial Institutions had been financed in the 36 States of the Federation and the Federal Capital Territory from inception till date.

He also disclosed that the Bank, under the 2020 wet season CBN-RIFAN partnership, financed 221,450 farmers for the cultivation of 221,450 hectares in 32 States.

“The North-West zone with 85,261 farmers that cultivated 120,218 hectares represented 38.5% in total number of farmers and 54.3% in total number of hectares financed,” he disclosed, adding that the massive pyramids being launched in Kebbi were harvests from various fields across Kebbi State and a confirmation of the positive outlook of the Anchor Borrowers’ Programme.

Speaking further, Mr. Emefiele said the partnership between the CBN and the Kebbi State Government and RIFAN aimed at strategically complementing the Economic Sustainability Plan of the Buhari Administration. Following the President’s approval of the resuscitation of the Nigeria Commodity Exchange (NCX) and the commitment of N50b by the CBN and other Stakeholders, he said a vibrant commodity exchange would enhance post-harvest handling, guarantee effective pricing for farmers, minimize the adverse effect of middle men and ultimately transfer the gains from primary production to other nodes of the value chain.

While acknowledging the importance of loan repayment to the sustainability of the programme, he stressed that the CBN was constantly engaging the farmers to enhance their trust in the system, provide a competitive price arrangement and facilitate effective market linkages for their outputs.

To further create value and transfer these gains along the value chain, he said the CBN also maps miller to off-take the paddies and track the release of outputs to the market as the Bank strives to manage inflation and grow the rice value chain in Nigeria.

The CBN Governor expressed optimism about Nigeria’s capacity to achieve food self-sufficiency within the shortest time possible, adding that the CBN and RIFAN both target cultivation of 1million hectares of rice farms; which is over 350% increase from the 221,450 cultivated in 2020.  He said the Bank and RIFAN equally nursed an ambitious two cycles of production in the dry season, which will trigger a continuous drop in price of rice in the country.

In his remarks at the event, which featured the sale of paddy to millers as loan repayment by rice framers under the CBN-RIFAN 2020 wet season cultivation, the Kebbi State Governor, Sen. Abubakar Atiku Bagudu, commended the CBN Governor and his team for the novel initiatives. He noted that the moves had not only brought succour to the country in terms of food security and diversification but had also successfully made the country exit recession in two quick successions.

Governor Kayode Fayemi of Ekiti State, who doubles as the Chairman, Nigeria Governors’ Forum, commended the CBN for thinking outside the orthodox paradigm of growing GDP only. 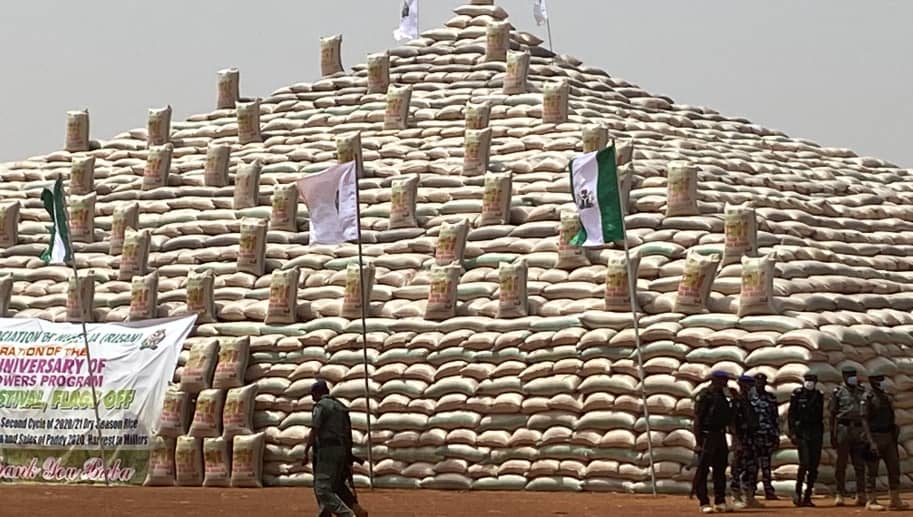 Also speaking, the President, Rice Farmers Association of Nigeria (RIFAN), Alhaji Aminu Goronyo expressed gratitude to President Buhari for his vision that Nigeria must feed herself by producing what she eats and eating what she produces. .

While also noting that the CBN had done well to actualise the Buhari vision, Goronyo said the CBN Governor had proved to the world that agricultural revolution was doable.