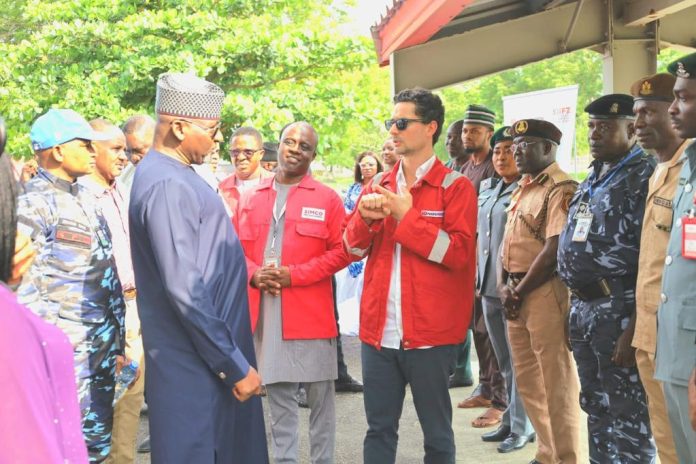 The Federal Government has announced plans to lift the suspension order on Nigerdock terminal operations following its willingness to abide by the rules amid its contributions to the growth of the National economy.

The Minister of Transportation, Mu’azu Sambo disclosed this in a statement by the Deputy Director Press and Public Relations, Anastasia Ogbonna on Friday.

The minister who stated this recently when he visited the firm in Lagos in the company of the Minister of State for Transportation, Prince AdemolaAdegoroye and some Management Staff of the Ministry, pointed out that the reason why they were suspended was as a result of complaints from other Terminal Operators, saying Nigerdock had operating advantages over them.

“What led to your suspension was that I received complaints from Terminal Operators, saying that you are not on the same level with them. In the sense that they pay more to the government than you do. You’re likely to attract freight at much lower cost to the detriment of their businesses”, the Minister disclosed.

He, therefore urged them to liaise with Nigerian Ports Authority (NPA) to work out all the operational licenses needed to enable them operate and the latter should forward same to the Minister of Transportation whose prerogative it was to give approvals.

Responding, the CEO, Nigerdock, Maher Jarmakani, said the firm has taken notable steps in this regard as they have been granted bonded permits by the Nigerian Customs and they are currently working with Nigerian Ports Authority to ensure all processes of getting the needed approvals are followed accordingly.

“We are seeking your support Honourable Minister and that is why we wrote a letter of appeal for your guidance and your support to see that we have followed all processes and procedures” Jarmakani stated.

Furthermore, Jarmakani informed the Minister that Nigerdock’s business operations was not limited to terminal operations but includes marine services and free zone operations, adding that the company has operated for about 30 years and within this period has employed more Nigerians than its peers.

While appreciating the Ministers for the visit, he assured that the company would not undermine the country’s extant rules and regulations.

NPHCDA Calls For Calm Despite Concerns Over Oxford/AstraZeneca Vaccine