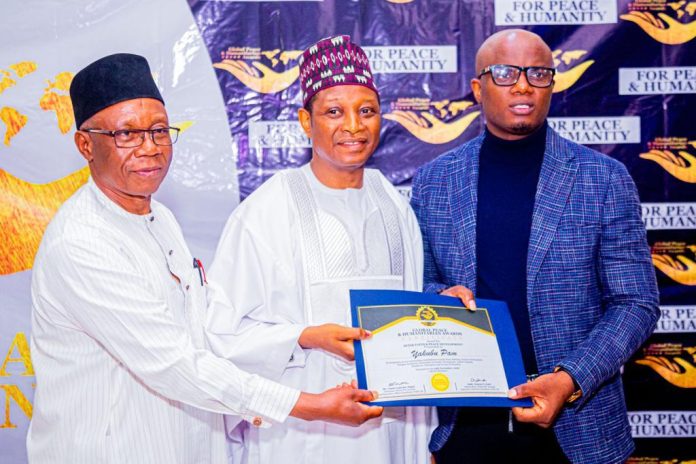 The Executive Secretary Nigerian Christian Pilgrim Commission (NCPC), Reverend Yakubu Pam has called on the federal government to make laws that would protect the rights of women saying, they are the fabric in which the nation is built.

He affirmed that women are the worst hit when it comes to violence, especially domestic violence.

Rev. Pam decried the situation where women are denied their family legitimate inheritance on account of gender.

He therefore, condemned such barbaric and inhuman culture stating that they should be jettisoned in order to give women their rightful place in our customs and culture.

The NCPC helmsman also stated that” without peace there would be no meaningful development anywhere in the world; that peace does not necessarily mean the absence of war”.

Rev. Pam used the opportunity provided by the award to highlight some of his peace interventions embarked on even as the Executive Secretary of the Nigerian Christian Pilgrim Commission, some of which helped to de-escalate crisis in some troubled spots in Nigeria.

He reiterated that” peace building is work in progress, it touches humanity and has no finishing line”.

The NCPC boss while commenting on the award, thanked the organizers for considering him worthy and deserving of the prestigious award .

He described the theme of the award which is, ” Peace Building and Sustainability the Risk in the 21st Century” as apt and meaningful.

He further described the day as auspicious as it coincided with the commemoration of the United Nations International Day for the Elimination of Violence against Women and remembrance of victims of warfare.

While presenting the award to the NCPC boss, the National Country Director of the Global Peace Humanitarian Award, Ambassador Ozuem Esiri said, ” Sir, we recognize your efforts in promoting peace both local and internationally “.

He had earlier commended the NCPC boss for his bold initiative to embark on the maiden Christian Pilgrimage to the kingdom of Jordan this year despite all odds.

He stressed that the effort was not a mean achievement as it helped to promote inter- faith harmony which should be encouraged by all peace loving people.