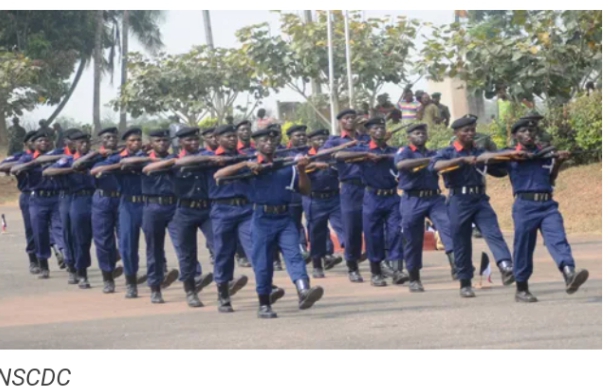 The Federal Government has charged the Nigerian Security and Civil Defence Corps (NSCDC) to immediately develop a robust scheme for school protection across the country in order to ensure the safety of children everywhere, especially within the school environs, from the incessant attacks by kidnappers and armed men.

The charge was given today by the Minister of Interior, Ogbeni Rauf Aregbesola, in his office in Abuja  when he decorated Ahmed Abubakar Audi as the new Commandant- General CG of the NSCDC.

According to him, “children are a specially protected social category. They are innocent and at the same time vulnerable. They are as vulnerable to external circumstances as to their own wiles.”

Aregbesola who expressed sadness over the incessant spate of violations and kidnappings in schools urged the NSCDC to continue to work in synergy with other security agencies with a view to immediately restoring peace and security in the country, particularly within the school environment.

In his speech titled “Your moment to be a Hero”, the Minister reminded the new Commandant-General that he is mounting the saddle of this great organization at a very critical time in our dear nation with challenging security situations. He therefore informed him that it is going to be rough but that, as a motivational speaker once wrote, it is great challenges that produce heroes and men of history. He thus advised him to continue to navigate diligently and triumphantly, taking cognisance of the rigorous selection process that brought him into office, so as to ensure that he delivers on the mandate of the NSCDC in line with the policy thrust of the President Muhammadu Buhari Administration.

Ogbeni Aregbeslola further charged the leadership of the Corps to develop a robust scheme that would not only check the menace in the schools, but also ensure the protection of critical national assets, such as pipelines, electricity pylons, stations and cables, telecommunication masts, cables and installations.

The minister also posited that the Agro Rangers scheme should be developed to cover the full agricultural sector and offer protection to all categories of farmers, stressing that the protection of crop farmers and pastoralists is a matter of national food security.

In his welcome remarks, the Ministry’s Permanent Secretary, Dr. Shuaib Belgore, assured that the Ministry will continue to support the agencies under it to ensure that they deliver on their respective mandates which is the provision of internal security and citizenship integrity.

In his response, the new Commandant-General, Nigerian Security and Civil Defence Corps, Ahmed Abubakar Audi, assured that the Corps under his watch, will among others, improve on institutional wellness and also leverage on proactive intelligence gathering in its operations, as this would bring to a barest minimum the asymmetric war now going on in the country.

The CG thanked President Muhammadu Buhari for giving him the opportunity to serve and commended his administration for its avowed commitment to the safety of lives and property, and pledged the NSCDC’s total commitment to the realization of its mandate.