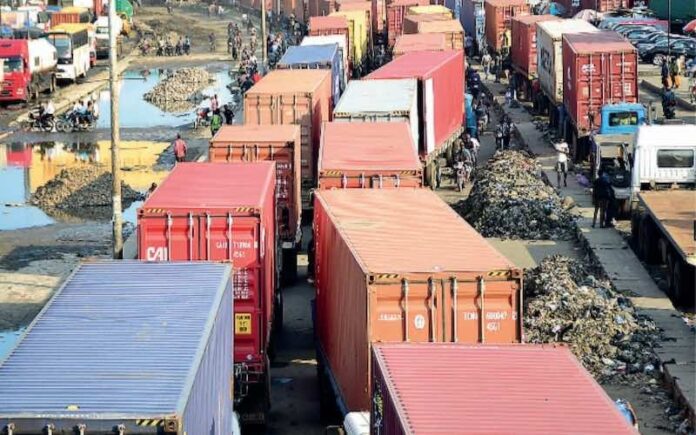 An end to the gridlock at Apapa and Tin-Can Ports may be in sight, as the federal government is set to deploy at least 200 security personnel, to ease traffic on the critical route.

The Minister of Transportation, Rotimi Amaechi, disclosed this at a meeting with Maritime Stakeholders and the Maritime Workers Union of Nigeria (MWUN) in Lagos.

It would be recalled that the union had threatened to go on strike if government failed to address the gridlock on the route.

Amaechi however, said that there should be a Steering Committee headed by the Permanent Secretary of the Ministry, Magdalene Ajani, to seat monthly until the challenges are overcome.

Other members of the committee would be from the Nigerian Ports Authority, Nigerian Shippers Council, Maritime Workers Union of Nigeria (MWUN), Road Safety and Lagos State government.

The minister in a statement on Wednesday by his Media Assistant, Taiye Elebiyo-Edeni, directed the committee to write to the Inspector General of Police for more officers to be deployed for the assignment.

“The issue of traffic on these routes is because in Nigeria we don’t discipline people. People do whatever they like even when it’s wrong because there is no consequence for our actions. We need security officers to enforce compliance on truck blocking the road.

“100 men at Tin Can and Apapa to be stationed their everyday because Nigerians don’t obey until there are consequences for actions. NPA, Shippers Council must have a level of funding to resolve this challenges.

“We need to talk to Shippers and Traders especially those around Warri, to see how they can be using Warri port, so that Lagos Ports will be decongested, we can get security to follow the cargoes to that area, so that traders from Aba, Onitsha that are ready to use that Port can go there.”

Speaking, the Deputy Secretary General of MWUN, Abudu Eroje, said that the union wanted to go on strike because of the hardship workers faced everyday trying to go to work because of the gridlock.

He said that the union is now part of the Implementation Committee which took a decision that letters will be sent out to all relevant stakeholders giving an ultimatum when all trucks must leave the road back to their various parks.

Eroje said that a Manuel call-up system would commence before the electronic system to enable all access road to Tin Can by Mile 2 be cleared.

He said that before the date of ultimatum expires, all truck owners, relevant stakeholders would be sensitized before enforcement.

TUC Should Partner Buhari Against Corruption, Not Stampede Him -Presidency

The third generation (3G) and fourth generation (4G) base transceiver stations (BTS) deployment in Nigeria has increased from 30,000 to 53,460 while Fibre Optic...

At present, there are over 86,000 banking agents across 772 out of the 774 local government areas in Nigeria, a demonstration of FirstBank’s commitment...

The Central Bank of Nigeria (CBN)'s Anchor Borrowers’ Programme (ABP) has not only ensured that Nigeria attains self-sufficiency in food production, but has helped...

The Federation Accounts Allocation Committee (FAAC), yesterday at its meeting through Virtual Conference shared to the three tiers of government, a total sum of...