The deployment of the smart grid system is in the advanced stage of the procurement process for a robust deployment of a full-scale state-of-the-art Supervisory Control and Data Acquisition (SCADA)/Energy Management System (EMS).

TCN operates the national electricity grid with over 20,000 kilometres of 330 and 132 kilovolts (kV) transmission lines, said to be among the few largest transmission networks in Africa.

At the moment, Nigeria’s transmission network consists of high voltage substations with a proven 7, 300 megawatts (MW) of electricity wheeling capacity, and still expanding. This transmission system is being reformed by TCN as the Nigerian Electricity Market (NEM), which comprising the Generation Companies (GenCos), Transmission Company of Nigeria (TCN) and the Distribution Companies (DisCos), prepares for a competitive market stage away from the Transitional stage it has been for over seven years.

This new stage will mean that all transactions are based on contracts with optimal customer service delivery. And to test run this, the Nigerian Electricity Regulatory Commission (NERC), strongly pushed for the Service Level Agreement (SLA) in 2021 binding across all the value chain operators – GenCos, TCN and DisCos, to ensure there is improved service delivery to the over 10,000 registered end users of electricity (DisCos’ customers).

Away from improving the interface level between TCN and other players in the industry, the latest grid operation report obtained from TCN, has indicated that the current management led by the Managing Director and the Chief Executive Officer of the company, Engr. Sule Ahmed Abdulaziz, has boosted the digitisation of grid operations more than ever. The National Control Centre (NCC) control room is solely responsible for all activities related to grid network data acquisition, real time grid operations and management for optimal service delivery.

According to the official report, in March 2022, the TCN management converged its System Operations (SO) staff as they showcased the Stop-Gap Network Automation Solution.

The Stop-Gap Solution which is the first of such technology deployed in the annals of the Nigerian power sector, was exclusively installed and deployed by the in-house engineers of TCN.

Excerpts of a manual of operation of the hi-tech automation system indicates that the stop-gap solution is core at the function of grid monitoring and acquisition of data from remote power generation and transmission substations to the National Control Centre.

The system works by utilizing the Internet of Things (IoT) solution and Virtual Private Network (VPN) through the use of various Internet Service Providers (ISP) whom TCN had deployed for seamless operations.

To ensure effective operation, a Principal Manager (SCADA) at TCN, Engr. Isaac Chawai Habila, said TCN constituted a 12-man task team in May, 2021 to develop and deploy an alternative network system application as a stop-gap solution for real-time grid operations and management to complement the existing Supervisory Control and Data Acquisition system (SCADA).

“This network automation system was deployed to assist TCN in conveying critical operational measurements data from remote stations to NCC using the contemporary web technology, which is an integral component of the IoT.

“So far, the data received from remote stations has enhanced NCC to have better insight of the grid power flow and which has improved NCC in taking decisions that have impacted positively on the security and integrity of the Grid,” Engr. Habila noted.

Also, with the deployment of the stop-gap solution, the General Manager, NCC Osogbo and Chairman of the task team (NAS), Engr. Balarabe Abdullahi, added that TCN can now access some stations and substations that were not captured in the last SCADA World Bank Project of 2004 on real time.

“Today, with TCN’s stop-gap solution the grid operators can monitor a wider part of the grid. This is making grid operations and management a lot easier and more efficient,” said Engr. Abdullahi.

Also speaking on the impact of the digital system on the entire power system. The Executive Director, Independent System Operation (ISO), Engr. Maman Jimoh Lawal, said for any transmission company to strive. Grid management involves levels of control that will ensure grid security and stability.

“The stop-gap solution has helped TCN’s System Operators to manage the grid effectively but this can only serve as a temporary measure.

“While the stop-gap measure subsists, the company will continue to pursue the ongoing process for the acquisition of a full-scale SCADA System,” Engr. Lawal explained.

In his comments about the innovative network automation system scheme, the Managing Director and Chief Executive Officer of the Transmission Company of Nigeria, Engr. Sule Ahmed Abdulaziz, described it as a quantum leap, at a time when the Minister of Power, Engr. Abubakar D. Aliyu, has tasked agencies on innovative ways to improve electricity supply to Nigerians.

Engr. Abdulaziz said: “Thanks to President Muhammadu Buhari and the Minister of Power, Engr. Abubakar D. Aliyu that the Nigerian power sector is steadily receiving historic attention with a quantum of investments that would redefine the sector for the best.

“We have gone far ahead with the procurement of new SCADA/EMS schemes but we felt as a responsible company that are waiting for the new SCADA, we can deploy a stop-gap technology which we have understudied in other countries to be very efficient in boosting real-time electricity grid monitoring,” noted Engr Abdulaziz. 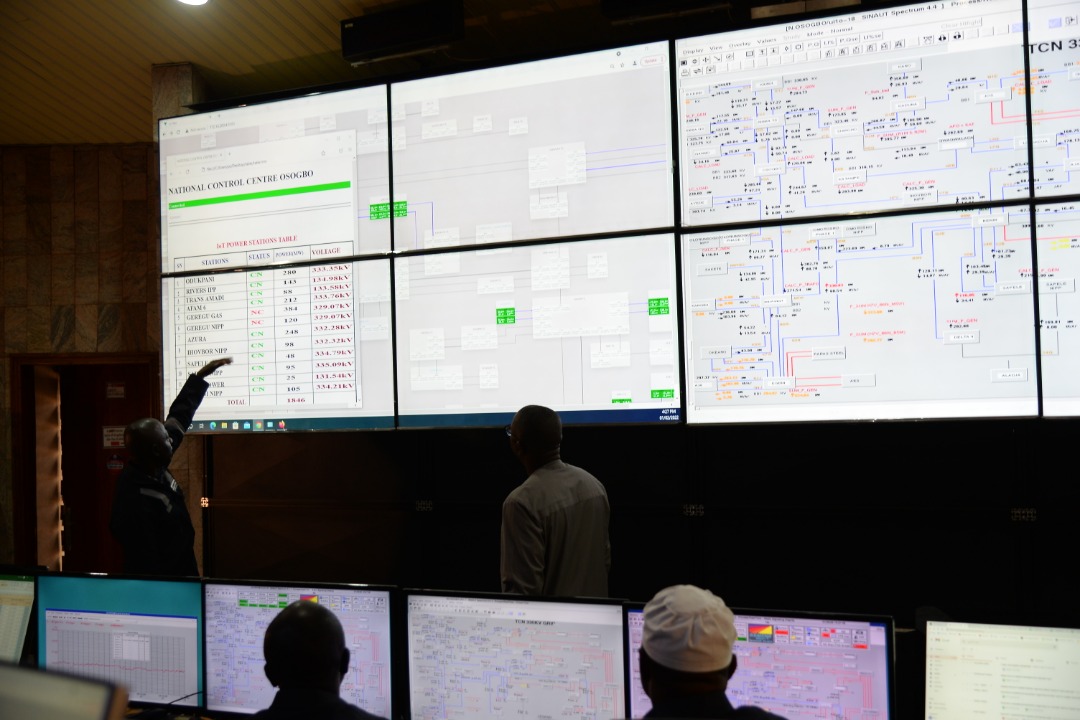 Highlighting the impact of this scheme, he said with the improved collaboration of other players in the electricity value chain, TCN has been able to reduce cases of system collapse through real time monitoring of operations at the various power transmission substations nationwide, and live interaction with operators at the power plants and DisCos’ injection substations.

The TCN head also hinted that the company was moving on to build two new National Control Centres in Abuja and Osogbo. These, he said, would further improve the robustness of the Nigerian electricity grid. This preparation is coming at a time when Nigerian power operators are gearing up to take part in electricity export as soon as the Regional Electricity Market (REM) of the West African Power Pool (WAPP) is launched.

Abdulaziz, who is also the Chairman, Executive Board of WAPP, said Nigeria, through TCN, has been exporting electricity to Niger, Benin and Togo under a country-to-country arrangement.

However, the TCN helmsman said the regional market will further enable GenCos to export power to more West African countries which will be evacuated by TCN transmission infrastructure, and the federal government can earn more foreign exchange from that for national development.

He said: “The National Control Centre and other technology systems will improve the stability of the national grid. The government is doing a lot to improve the power sector and that is why we always encourage Nigerians to support us by helping to guard critical national infrastructure.

“We believe that as more of the investments and our transmission expansion projects materialize, Nigerians will experience more improved electricity supply. This is the goal of TCN and I strongly believe that we are not resting on our oars to deliver on this mandate,” assured Engr. Abdulaziz.

In a comment on the TCN’s remapping of its investments in the power sector, a pro-consumer group, the Nigerian Power Consumers Forum (NPCF), said only such critical power transmission grid investments, backed by a matching strength at the DisCos’ end can bring succour to power consumers.

Convener of NPCF, Michael Okoh, in analyzing the feat, said the stop-gap solution has been existing in some countries like Benin Republic, and that it was better than late for Nigeria.

Okoh said: “This has been long overdue, because if the grid or system operator does not have comprehensive operational data of the entire power grid, it is difficult to manage the fast-growing system.

“The existing inadequate SCADA System cannot provide adequate grid visibility and we know that the SCADA system is not yet ready. I commend the management of TCN led by Engr. Sule Abdulaziz for this innovative move. It shows that the current crop of TCN managers is actually thinking well to improve services,” he stated.

Engr. Okoh also called on the DisCos and other actors in the Nigerian Electricity Supply Industry (NESI) to take similar actions that have collective impacts on the national grid.

According to the NPCF team lead, “What consumers need is adequate power supply and they will pay the right tariff. We also call on the DisCos to match this technology so that faults can easily be cleared and service delivery optimised.”