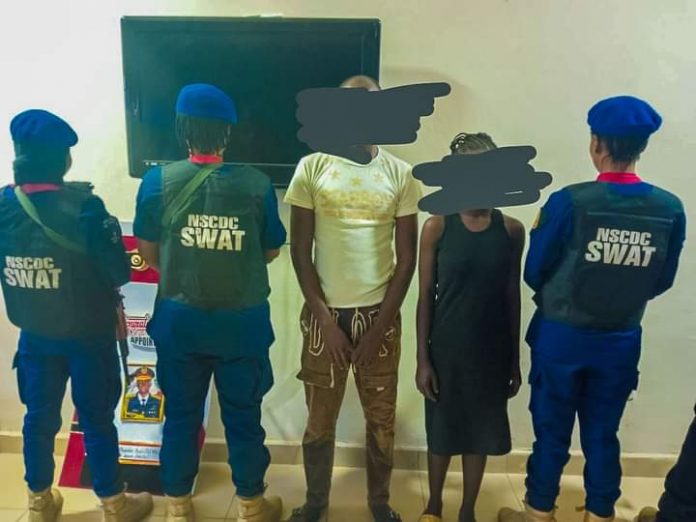 A suspected pedophile, who has confessed to raping his 14-year-old niece, has attributed his shameful act to “the work of the devil”.

The suspect, Mr. Tyoughche Emmanuel, was arrested by the Nigeria Security and Civil Defence Corps (NSCDC) Female Squad in Anagada on Friday morning, and subsequently paraded in Abuja, by the Corps’ Commandant in charge of Anti-human Trafficking, Irregular Migration and other Related Offences Unit, Elor Janet.

TheFact Daily gathered that Tyoughche’s arrest was facilitated by a tip off from a Non-Government Organisation (NGO) in Abuja, Emerging Genderplus. Tyoughche, aged 38, who hails from Naka Gwe-West, Local Government Area of Benue State, was handed over to the human traffic Unit for his consistent sexual assault on his 14 years old niece, Angel (not her real name) who was under his care.

Narrating her ordeal in the hands of her uncle, the 14 year old said “my uncle, Mr Tyoughche Emmanuel, gave me a black substance in a small bottle to drink after which I slept off and the next thing I noticed was my uncle putting his fingers inside where I use for urinating”.

She said her uncle made the advances on her whenever his wife was away, and when she refused to give in, he would threaten to beat her until she spewed blood, “so I was afraid of telling anybody”. She said her uncle raped her “four times on different occasions”.

The accused, however confessed to the crime and pleaded for leniency, stating it was the work of the devil.

“I didn’t know what came over me, please, I know what I have done is very bad, please help me beg my brother to forgive me because this is a shameful act in the family”, he pleaded.

His wife, Mrs Janet Ifan Tyoughche equally confessed that her husband has not been performing his responsibility of providing for the family and he beats her regularly.

While parading the suspect, Commandant Elor, who decried the reoccurring and alarming cases of human trafficking, sexual harassment and female gender abuses in the country, reiterated the commitment of the Corps to ending the menace by protecting the girl child.

She promised that there would be no hiding place for perpetrators of such acts as rape, child molestation, human trafficking or any act violating the dignity and integrity of women or the girl child.

“The Commandant General has compelled us not to rest on our oars but to go all out to nip in the bud these ugly menace. That is why we swung into action with the Special Female Squad to arrest the suspect and bring the shameless rapist to book.

“It will no longer going to be business as usual for these criminal elements. This ugly act must stop, the girl child must be protected”, Elor said.