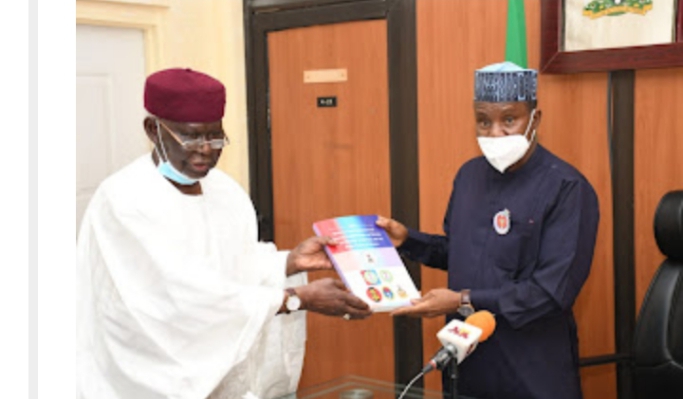 The Minister of Defence, Maj. Gen. Bashir Magashi (rtd) has received the report of the 25 – man Implementation and Advisory Committee for the Reform of the ministry and the Armed Forces.

Special Assistant to the Minister on Media and Publicity, Mohammad Abdulkadri, who disclosed this in a statement on Monday, 20 December, 2021.

TheFact Nigeria reports that the Federal Government had in September this year, inaugurated a 24-member Committee for advisory and implementation of recommendations contained in the report on the reform of the Defence Sector, to meet the need of closing gaps that exist in the structure and operation of the Armed Forces in interfacing with the Ministry of Defence.

General Magashi, while receiving the report thanked the Committee, led by Maj. Gen. Alwali Kazir (rtd), for total adherence to the convening order that culminated into a big volume of workable document.

The Minister gave assurances that the recommendations in the document will be carefully perused and doggedly pursued as catalyst towards achieving the end state of improved service delivery and performance in the defence and security sector.

Chairman of the Committee, Maj. Gen. Kazir (rtd) disclosed that a total of seventy-two recommendations emanated from wide consultations with stakeholders, which took them seventy-five days of brainstorming on the gamunt areas requiring reformations in the military sector.

General Kazir further disclosed that members of the committee gave their very best by deploying their very rich experiences patriotically in the discharge of their national assignments without any atom of consideration for any pecuniary benefits.

This, he said, gave birth to the uninfluenced and unbiased recommendations that will expectedly and expediously impact on the national aspiration for improved security architecture.

He therefore thanked the Minister for the opportunity to chair a committee comprising of carefully selected serving and retired senior military officers and top technocrats.