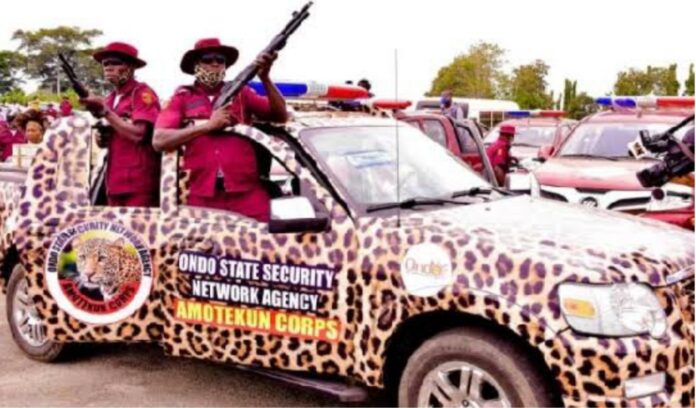 The Oodua Peoples Congress (OPC) has  pitched its tent with the southwest security Network, better known as Operation Amotekun, for its commitment to enhanced security in the region.

This was disclosed in a statement at the weekend by the Congress’s Publicity Secretary, Mr. Yinka Oguntimehin, who said that in the light of recent efforts of Amotekun in Oyo and Osun states, there are hopes that the security challenges in the region will soon become a thing of the past.

Oguntimehin was full of praise for the leaders of the group, TheFact noted, for their commitment to the protection of lives of citizens of the southwest.

Recounting some of the successes of the security outfit, he mentioned the interception, last year, of 14 Almajiris hidden in a vehicle container in Osun, as well as their recent feat in Iddo, which he said is also highly commendable.

He also expressed confidence in the security outfit “to flush out the bad elements in the region”.

The Congress’s Publicity Scribe went on to urge South East Governors to follow in the footsteps of the OPC and support the Eastern Security Network (ESN) to stop fleeing criminals from the southwest from shifting to the eastern part of the country. He tasked governors to proffer a lasting approach like that of the South West to rid the region of criminals masquerading as herdsmen.

“Now that the southwest is doing everything that is necessary to rid the region of criminal elements, including killer herdsmen and kidnappers, the southeast remains their next target and destination for destruction.

“It is advisable for the governors of the South East to enforce a better approach and modalities for securing the region using the Eastern Security Network (ESN),” he advised.

He further maintained that true federalism that is programmed on the basis of regionalism has always remained the best option for national growth and development.

“The tendency for Nigeria to be great as a country is high if we can restructure the country, using true federalism on the basis of regionalism.

“It is the best approach for us now because all the problems associated with insecurity, politics, the economy, social and religious matters will surely be addressed once and for all.

“The component units that make up the country will grow and develop independently without looking up to Abuja for solutions, especially on problems that have to do with insecurity,” he stated.