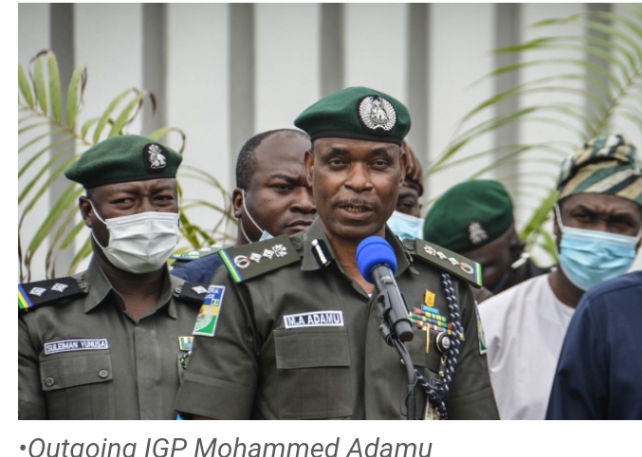 In view of the retirement of the Inspector General of Police (IGP), Mohamed Adamu, having clocked the age of 60, top police officers are said to be working both directly and through proxies to clinch the plum job.

A scrutiny of the police nominal roll, made available to TheFact Nigeria, shows that none of those on the rank of DIG has up to four years before retirement to be able to complete a full tenure as IGP.

Three DIGs with the most time left are Dan-Mallam Mohammed, Usman Alkali Baba and Sanusi Lemu, who all have until 2023 before retirement from service. Mohammed, born in Katsina in 1963, will be due for retirement on December 18, 2023. Lemu and Baba will leave the service in January and March respectively.

Among the AIGs, our findings show that only three persons have up to four years left in service. Two of them, Dasuki Danbappa Galadanchi and Hafiz Mohammed Inuwa, will retire in 2025, having been enlisted in the Force on the same day in March, 1990.

Galadanchi, born on January 10, 1966, was Commissioner of Police in Imo State, from where he was redeployed to head the Police Cooperative Society in Lagos. He earlier served as deputy commissioner of police in Ekiti, among other postings. He is currently the AIG in charge of Force CID annex, Alagbon Close, Lagos State.

Inuwa is currently the AIG in charge of Zone 13, Ukpo-Dunukopia, Awka, Anambra State. Born on March 21, 1964, at Ringim, Jigawa State, he has a Bachelor’s Degree and a Master’s in Public Policy and Administration (MPPA). He was promoted to Commissioner of Police on October 31, 2017.

AIG Moses Ambakina Jitoboh, who was the AIG in charge of border patrol, is the officer with the most number of years left in the service. Born in 1970 and enlisted in the force in 1994, Jitoboh has advantages in terms of age and service years. He was Commissioner of Police in Adamawa State, CP General Investigations at the Force Criminal Intelligence and Investigations Department before he was appointed an AIG. As AIG, he headed Zone 8 headquarters in Lokoja before he was transferred to border patrol.

The candidacy of the Bayelsa-born officer is said to be pushed by some influential persons, including former President Goodluck Jonathan, whom Jitoboh served for many years.

Those said to be in contention for the job but have no requisite four years are AIG Dan-Mallam Mohammed, Mustapha Dandaura, Zanna Ibrahim and Garba Baba Umar

On his part, AIG Zanna will have less than two years as he will be retiring on November 22, next year.

Zanna, a career police detective, was variously Commissioner of Police in Delta, Yobe and Zamfara states. He is currently the commandant of the Police Academy, Wudil.

Dandaura, the current Force Secretary, was CP Provost at the headquarters and one-time Rivers State Commissioner of Police.

Umar, on the other hand, was until his recent elevation to the position of AIG, serving as the CP Interpol at the headquarters.

While Nigerians wait anxiously to see how events unfold, it is noted that whoever is IGP after February 1, 2021 will inherit a huge responsibility with the police still reeling from the #EndSARS protest and insecurity all over the country.