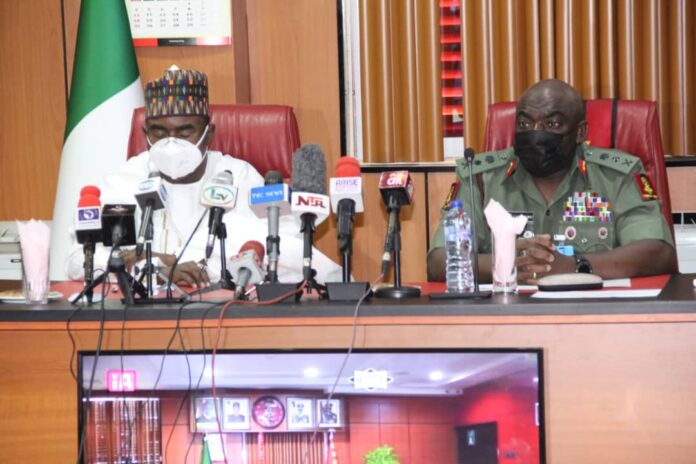 The Chairman/Chief Executive Officer, CEO of the National Drug Law Enforcement Agency, NDLEA, Brigadier General Mohammed Buba Marwa (rtd), has disclosed that over fifteen million Nigerians, mainly youths between the ages of 16 and 64, indulge in the use of illicit drugs.

Marwa, who made this disclosure on Wednesday, 14 April when he paid a courtesy visit to the Chief of Army Staff, COAS, Lieutenant General Ibrahim Attahiru at the Army Headquarters, Abuja, attributed most crimes in the country to drug abuse.

TheFact Nigeria reports that the  NDLEA boss said his visit was two-pronged: to congratulate the COAS on his well deserved appointment and subsequent promotion to the enviable rank of Lieutenant General, and to solicit for collaboration with the Nigerian Army in the area of training and professional support that will aid the Agency in the fight against illicit drugs and drug trafficking.

According to Marwa, the fight against drug abuse like other enforcement campaigns, needs further training of the Agency’s personnel to enhance operational efficiency.

He also said that there is a nexus between drug abuse and criminality as a result of irrational behaviour associated with the illicit drugs, and that criminals such as kidnappers, terrorists, bandits and so on, perpetrate their evil acts under the influence of drugs. He expressed optimism that if the menace of drug abuse is checked, crime rate in Nigeria will drop.

The former Military Administrator of Borno and Lagos States, commended the Nigerian Army for its role in the fight against drug trafficking and abuse in the country and urged that the tempo be sustained.

Responding, Lt Gen Ibrahim Attahiru thanked the Chairman for the visit and affirmed that the collaboration between the NA and NDLEA will give the fight against use of, and trafficking in illicit drugs a definitive boost, promising that NA under his leadership will be committed in assisting and collaborating with the NDLEA to achieve the noble objectives.

In his remarks, the Commandant said he was at the Headquarters to brief the COAS on the activities of the College since his assumption  of command as the 24th Commandant.

The COAS in his response assured the Commandant and his team of robust synergy and cooperation.

Also among those who paid a courtesy visit to the COAS are the Director General, Nigerian Institute of Leather and Science Technology, NILEST, Professor Mohammed Kabiru Yakubu and the Director General National Agency for the Prohibition of Trafficking in Persons, NAPTIP, Hajiya Imaan Sulaiman Ibrahim, both of whom also came to congratulate him on his appointment and to solicit for synergy that will aid them in the discharge of their constitutional roles.

In his remarks, the Army Chief assured them of NA’s continuous support to and cooperation with both agencies.

Highpoints of the visits were the  exchanges of plaques, and group photographs.