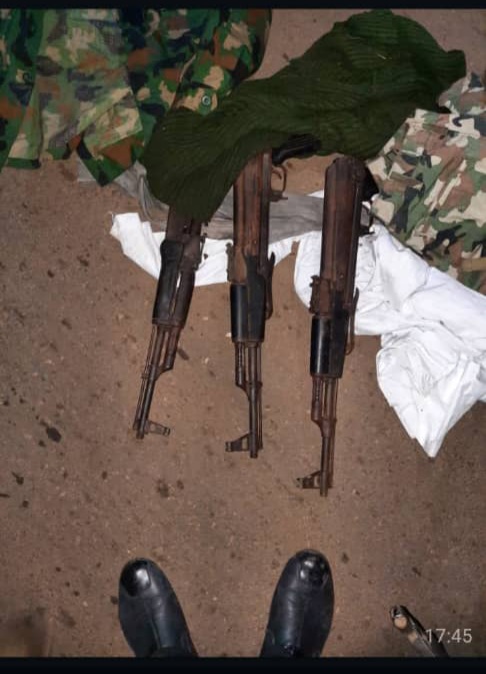 A combined team of security forces led by troops of the Nigerian Army, NA, have raided the operational Headquarters of the IPOB/ESN terrorists in Awomama Village, Oru East LGA of Imo State.

A statement from the NA, signed by its Public Relations Director, Brig. Gen. Mohammed Yerima, reveals that the early morning raid by troops of Nigerian Army, Nigerian Police Intelligence Response Team, IRT, and operatives of the Department of State Services, DSS, was launched in the early hours of Saturday 24 April, 2021, following a detailed intelligence report on the location of the terrorists’ operational headquarters and the movement of the overall commander popularly known as Ikonson Commander.

TheFact Nigeria reports that IRT and DSS teams along with troops of 82 Division of the Nigerian Army have been on the trail of the terror group since the unfortunate attacks on the Imo State Police Command and the Owerri Correctional Center on 5 April 2021.

The said Ikonson Commander who was the mastermind of those attacks in addition to multiple attacks in the South East and South South regions, was neutralised along with 6 of his top commanders.

The joint intelligence team had earlier arrested IPOB/ESN terrorists in connection with the April 5 attacks, who, upon interrogation, all confessed that Ikonson Commander, named as Vice President by their leader, Nnamdi Kanu, was responsible for mobilizing men and resources, as well as ordering and orchestrating the attacks on Owerri.

They equally revealed that Ikonson was responsible for many other attacks on Police stations across the two geo-political zones.

The intelligence team later tracked the IPOB/ESN top leader to his exact location in Awomama village where he and his to commanders were hibernating and plotting dastardly acts against the Nigerian state.

On noticing the presence of the joint operations team, IPOB/ESN terrorists launched heavy volume of fire on the raiding team who swiftly responded and overwhelmed them with superior fire power that neutralised Ikonson and six of his top commanders.

Sadly however, a Second Lieutenant and three IRT operatives paid the supreme price in the fire fight that ensued. The four officers who fought gallantly have already been evacuated to a military facility in Owerri.

So far, 3 AK 47 riffles, a Toyota Sienna van belonging to the terrorists and several other items of value including drugs suspected to be psychotropic substances were recovered and are being processed by the intelligence team to assist in further investigations and operations in the area. The joint security team is already dominating the general area while preparations for further operations are in top gear.

The neutralised Ikonson Commander had on several occasions posed for photographs with the fugitive leader of IPOB, Nnamdi Kanu.

The Chief of Army Staff, COAS, Lt Gen Ibrahim Attahiru has commended the troops, the Police IRT and DSS operatives for their determination in ensuring that the operation was a success. He prayed for the repose of the souls of the gallant officers who lost their lives in the operation, stressing that their sacrifice will never be in vain.

The Nigerian Army along with other security agencies assure that they will sustain intelligence-based kinetic operations in the South East and South South until the regions are free of terrorist activities.