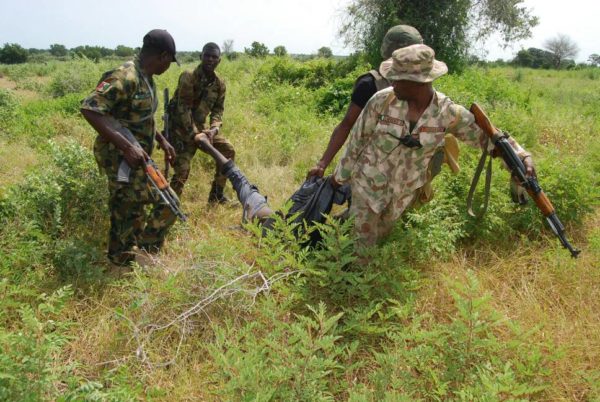 The Defence Headquarters, DHQ, has said that troops have killed more than 59 terrorists in various operational theaters within the 6 geo-political zones of the Country in the past two weeks, and recovered more than 34 AK 47 rifles.

The Director of Defence Media Operations, Major General Musa Danmadami, made this disclosure on Thursday during the bi-weekly press briefing in Abuja.

TheFact Daily reports that Danmadami, while fielding questions about the recent security alerts issued by some foreign embassies to their citizens in the country, said that citizens and other foreign nationals resident in Abuja and its environs have nothing to worry about, “because troops and operatives of other security agencies are in firm control of security situation in Abuja and in the entire country”.

He explained that, “alerts are products of intelligence”, which the Department of State Service, DSS, had in the past issued, and wondered why Nigerian press preferred to highlight the alarm raised by the Americans instead of the DSS side of the story.

Other recoveries made include: 9 mobile phones, 6 x 25litres jerrican of PMS, bag of grains, motorcycle accessories, foodstuff, 1 baofeng radio and the sum of N10,660.00 only as well as other sundry items.

On 20th October 2022, troops in conjunction with Department of State Security personnel and Civilian Joint Task Force made contact with Boko Haram/Islamic State of West Africa Province terrorists in Buduwa and Banki villages in Bama Local Government Area of Borno State and neutralized 1 terrorist while others fled with gunshot injuries.

Also, 1 terrorist surrendered to own troops and handed over 1 AK47 rifle, 5 rounds of 7.62mm special ammunition, 1 baofeng radio, 2 mobile phones and 1 camel pack amongst other items.

The suspect is currently in troops’ custody for further interrogation.

Also, in the same camp, a known terrorist Mr Lawan Yashin who attempted to escape upon sighting troops was neutralized.

Meanwhile, in the last two weeks, “a total of 145 Boko Haram Terrorists and their families comprising 30 adult males, 33 adult females and 82 children surrendered to troops at different locations within the North East theatre of operation”, Danmadami revealed.