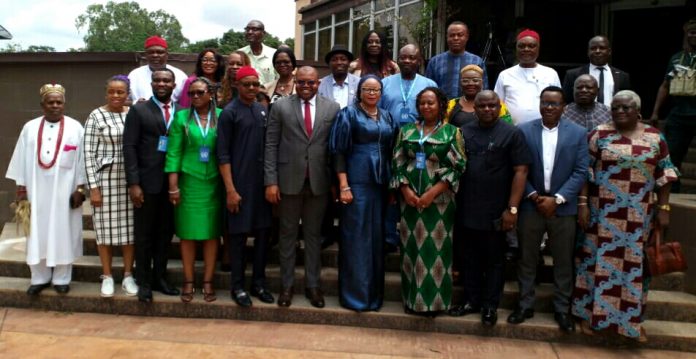 The Enugu State Government says it has approved a counterpart fund for value-added foods to treat and check under-nutrition and stunted growth in all children in the state.

“The value-added nutritious food is for children from zero to 59 months”, Gov. Ifeanyi Ugwuanyi said on Thursday in Enugu.

Ugwuanyi, who was represented by his deputy, Mrs Cecilia Ezeilo, said this while declaring open a one-day High Level Partnership and Coordination Meeting with Stakeholders and Policy Makers on Investment in Nutrition.

The theme of the meeting was: “Prioritising Investment in Maternal, Infant, Young Child and Adolescent Nutrition”.

He said that the growing level of stunt growth, which was getting about one to every five children, must be checked; and  that the government remained fully committed to do that.

According to him, the state government will shore up the nutritional needs of children under five and this will further reduce infant mortality to the barest minimum in the state.

“The state government is grateful to UNICEF, other international and local health partners as well as other stakeholders in ensuring that the state gets it right and rank among the states with the highest well-fed and well-nourished children in the country,” he said.

Speaking, Mrs Juliet Chiluwe, Chief of Field Office UNICEF Enugu, noted that UNICEF was committed to partnering with Enugu State and with other relevant partners and stakeholders to achieve the agenda of well-fed and healthy children.

Chiluwe noted that the meeting offerred an opportunity for awareness creation and high level advocacy on the importance of nutrition to the survival and general well-being of women and children as well as its impact on productivity, economic growth and national development.

“The event is very strategic as policy makers from the state and LGAs, relevant Federal stakeholders and the private sector are present to reinforce government support for the state to expand scope of the nutrition programme.

“This programme, which has been at the three pilot LGAs since 2019, roll out planned strategies and community innovations to tackle nutrition issues especially in the first 1000 days, with expectations of breaking the inter-generational cycle of under-nutrition within Enugu State.

“Available evidence shows that getting the right nutrients at the right time is critical.

“Enugu State has stunting (growth) rate of 15 per cent, approximately 147,816 children are shorter than expected height for their age, with associated poor cognitive functions,” she noted

The Commissioner for Health, Prof. Ikechukwu Obi, noted that proper nutritional balance diet for all residents especially for children was an integral part of optimal health and it re-emphasis the quality of life.

The state’s Commissioner for Budget and Planning, Dr David Ugwunta, said that the high level meeting was to identify opportunities and challenges in tackling under-nutrition of children.

“From this meeting, we should come out with concrete and actionable plans and advocacy programmes that will be followed up and implemented to get positive desirable outcomes,” Ugwunta said.