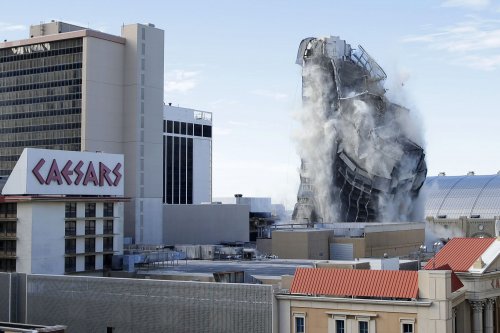 The Mayor of Atlantic City in New Jersey, United States of America on Wednesday, ordered the demolition of a closed casino on the Atlantic City, N.J., boardwalk once owned by former President Donald Trump.

It was reported that the Mayor described the vacant building as “an eyesore” and made it a priority to destroy it.

The Wall Street Journal made this known in a tweet on its verified Twitter handle with a picture showing a building in a high brow area with the caption: ‘Trump Plaza Casino Demolished in Atlantic City’.

@wsj wrote: “A closed casino once owned by former President Donald Trump was demolished Wednesday in Atlantic City, N.J. The mayor had called the vacant building an eyesore and made it a priority to destroy it”.

A report by the Wall Street Journal said that the Atlantic City Mayor, Marty Small, who took office in January, made it a priority to destroy the vacant building, calling it an eyesore for the boardwalk.

@wsj report also said that the city hosted a viewing party of the implosion and allowed viewers to pull up in their cars to witness the demolition of the property, which opened in 1984.

Mr. Trump sold the financially struggling casino, which previously was the cornerstone of his Atlantic City empire, in 2013. Trump Plaza was the last Atlantic City casino to bear the former president’s name and has been closed since 2014.

After he sold the casino, Mr. Trump’s attorneys argued in bankruptcy court that his name should be removed from the property.